The Lomachenko vs Commey live stream sees the former looking to punch his way to the top.

One of the biggest ‘L’s of 2020 has led to the Vasiliy Lomachenko vs Richard Commey live stream, one of the biggest boxing matches of the end of 2021. This weekend, we’ll see Vasilik Lomachenko punch his way back to the top of the lightweight division, in an attempt to redeem himself after a surprising title loss to Teofimo Lopez.

Lomachenko’s likely a little frustrated that his desired rematch against Lopez hasn’t happened. Commey looks like the next best thing. And since the rest of the lightweight boxing world failed to light a spark as of late, it seems like a win here could be huge for Lomachenko. It could even propel him to a challenge against the current champ George Kambosos Jr. in 2022.

What does beating Commey prove? The 34-year-old Ghanaian held the IBF lightweight title in 2019, and has a cautious fighting style that will likely force Lomachenko to take a risk here and there. But the money’s on Lomachenko, as most people think it’s just a question of how many rounds Commey will last. Especially since Lopez took Commey out with a second-round TKO a little under two years ago (Dec. 14, 2019).

But what if Commey surprises us all? After all, Kambosos did beat the odds against Lopez. It would likely send him to face Kambosos (though the victor there feels a bit easier to predict than if Lomachenko wins).

Even worse, a loss to Commey could put Lomachenko on the ropes. Maybe he would try fighting at 130 pounds, but he wouldn’t return to that class with a lot of steam behind him.

How to watch Lomachenko vs Commey live stream from anywhere

We think speed, security and simplicity make ExpressVPN second to none. During our tests, we saw fast connection times, and we’re impressed by the service’s ability to access more than 3,000 services spread out across 160 locations in 94 countries. There’s a 30-day money-back guarantee if you’re not satisfied.

If you’re away from home and so can’t watch the Lomachenko vs Commey live stream, you can still see the game. Using the best VPN makes it so that you can appear to be surfing the web from your home town, so you can access the same streaming services you already pay for.

Here’s how easy it is to stream anything from anywhere in the world:

1. Get a VPN (we recommend ExpressVPN as the best out there)
2. Connect to the location you want to stream from
3. Use your usual streaming service and watch like normal

Exclusive Tom’s Guide Discount: Save 49% on the 12-month ExpressVPN plan

Lomachenko vs Commey live streams in the US

In the US, Lomachenko vs Commey is going to be broadcast on ESPN Plus (which appears to start earlier, with a 5:30 p.m. ET time listed, which likely has prelim matches) but you don’t really need that service when the main card is also going to be on ESPN. And ESPN isn’t just available on most cable packages, it’s on two of our favorite streaming services: FuboTV and Sling TV.

ESPN is also on Hulu with Live TV and YouTube TV, but we recommend Sling and Fubo.TV, two of the best streaming services in our opinion.

And as for which you should pick? It’s a case of “you get what you pay for” as Sling Orange & Blue (which you’d need to get ESPN, FOX, NBC and NFL Network) costs $50 per month, while the Fubo.TV Standard package gives you all of the above, for $65 per month.

Fubo.TV: One of the best streaming services with FOX, and the top pick for watching all of the 2021 NFL live streams, Fubo has all of the right network channels and the two cable channels you don’t want to go without. Who needs cable? Not Fubo subscribers. It’s got a 7-day free trial so you don’t need to pay up front.

If you can stand to miss CBS games, Sling TV provides a middle ground. The $50 per month Sling Orange + Blue package has FOX affiliates for this game, as well as local NBC affiliates plus ESPN.

Lomachenko vs Commey live streams in the UK

Fight Fans in the U.K. willing to stay up late can catch Lomachenko vs Commey on  Sky Sports.

The main card starts at 2 a.m. GMT and the main event should begin at around *gulp* 4 a.m. GMT.

Americans abroad could just use the service of their choice, provided they log in via a VPN such as ExpressVPN.

Fite has the Lomachenko vs Commey live stream for other territories, so check them out if your preferred service isn’t streaming it.

Even higher odds for Lomachenko are found at BetMGM (according to Yahoo!Sports), where he’s a -1100 favorite to Commey’s +550. 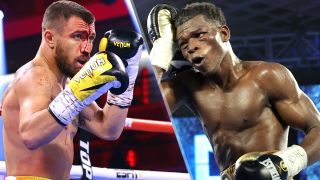