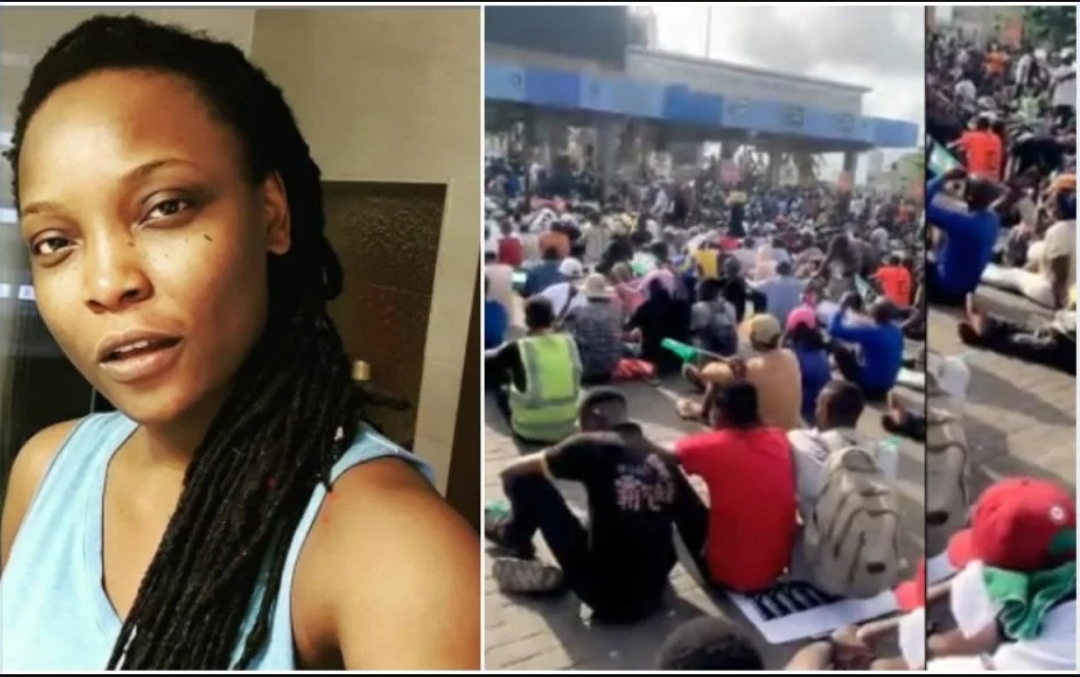 A popular Nigerian disc jockey, Obianuju Udeh, aka DJ Switch, says she and other #EndSARS protesters counted 15 corpses at the Lekki toll gate when men in army uniform opened fire on peaceful protesters.

Earlier, theeditorngr.com had reported that soldiers of the Nigerian Army invaded a peaceful protest at Lekki toll gate on Tuesday evening, October 20, killing #EndSARS protesters in the process.
However, since the shooting at Lekki toll gate, there has been a controversy over the deaths as most of the persons said to have been killed have debunked the reports.

Recounting the Lekki massacre in a video shared on her Instagram page on Friday, October 23, DJ Switch said at least 15 persons were shot dead on the night while several others sustained injuries of varying degrees.

â€œWe were teargassed. We would run and come back and the only thing we fought with was our flags. We would sit on the floor and raise our hands up, waving the flags and singing the national anthem. Thatâ€™s all we had,â€Â she said.

â€œThey put off the light. Even if there is no power in that axis, on a good day, there is always light at the Lekki toll gate. But on that day, there was no light, the street lights were off, it was pitch black.
â€œA boy jumped on me, asking that I should cover him. I didnâ€™t even know why he did that. They shot that boy at my back. I fell while we were trying to pick up bullet shells. One landed close my ear while we picked one from someoneâ€™s laps.

â€œThe military were there killing Nigerian citizens. The police and SARS came and were doing the same thing, aiming and shooting. They were pointing the gun at us and shooting live bullets. Who takes live bullets to protest ground? Who does that?â€

DJ Switch who urged Nigerian leaders not to â€œinsult the pains and intelligence of families affected by trying to downplay what happenedâ€ during the incident, also claimed that soldiers threw the dead bodies of some of the protesters killed during the incident inside their vans.

â€œTo our leaders, do not insult the grief and intelligence of Nigerians. Do not insult the pains that affected families are facing. People were falling left and right. People did die, it wasnâ€™t photoshopped.

â€œSomething I think about now, with hindsight, which I wished we hadnâ€™t done was carrying dead bodies and dropped at the feet of soldiers so that they could see what they did to us,â€Â she added.

â€œWhen I asked their unit commander or something â€˜why are you killing usâ€™? I wish we didnâ€™t do that because they ended up throwing the dead bodies inside their vans. This continued until the next morning.â€
The entertainer, however, dismissed claims that she earlier said 78 people died during the incident, urging people to desist from peddling misinformation.

â€œI never said 78 people died. What I do know is that as of when I was doing my live video, seven people had died. When my phone went off, we had counted about 15 people,â€ she said, adding that:Â â€œI donâ€™t know if it was more than that. We had a lot that had stray bullet wounds and all that. Itâ€™s also not true that my cousin died.â€

Switch said she decided to speak up as a result of speculations, adding that she has been threatened for live-streaming the incident,Â â€œMy life was threatened for speaking up. People risked their lives to take me away from a place I call my home,â€Â she said.

End SARS: “Use of force worsens tense situation” – Jonathan as he condemns attack