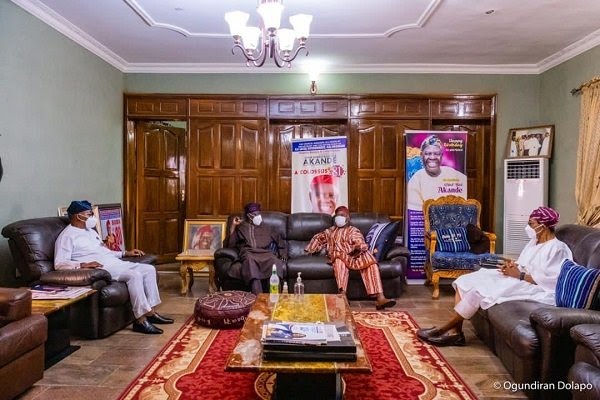 Bola Tinubu, a National Leader of the All Progressives Congress, APC, Thursday, met with the Governor of Osun State, Gboyega Oyetola and the Minister for Interior, Rauf Aregbesola.

The meeting, which was held behind closed-door at the residence of a chieftain of the party, Bisi Akande in Ila Orangun, was to broker peace between Oyetola and Aregbesola.

Oyetola, a member of the APC took over leadership from Aregbesola in 2018.
However, shortly after assuming power, there were reports of rift between the governor and his predecessor, as Oyetola was said to have scrapped some programmes initiated by Aregbesola.

However, Aregbesola announced on his Twitter page that he arrived Osun State with entourage from the ministry of Interior to commence stakeholdersâ€™ engagement meeting with different stakeholders in the state as directed by President Buhari.

His post: â€œOur entourage paid a courtesy visit to our leader and father, Baba Bisi Akande, alongside Governor of Osun State, Alhaji Adegboyega Oyetola in Ila Orangun. Baba advised us on #Endsars, insecurity amongst other issues!â€

Lai Muhammed: “Suicide bombing, attacks has become a thing of the past.”

Boko Haram: We have vowed never to return, Buhari rubbished us after Jonathan left – Mercenaries