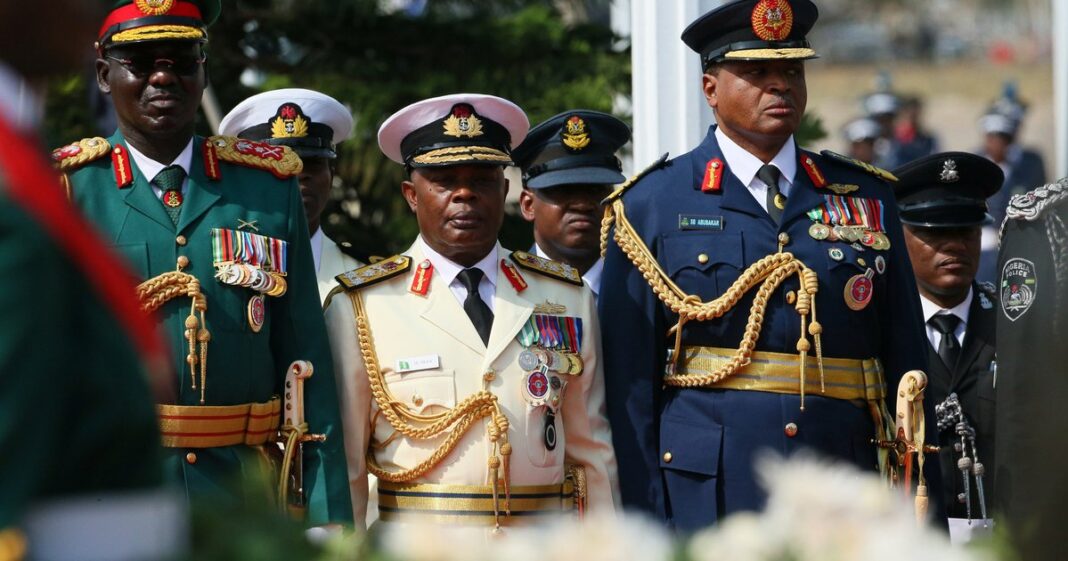 After 35 years of service to the nation, 256 Non Commissioned Officers (NCOs) of the Nigerian military were on Friday retired in a colourful celebration.
The retirement of the 256 followed several months of courses on reintegration to civil life, entrepreneurship and other kills acquisition programmes at the Armed Forces Resettlement Centre (NAFRC), Oshodi in Lagos, Nigeriaâ€™s commercial city.

According to theeditorngr.com reports, the retirees were drawn from the Nigerian Army (NA), Nigerian Navy (NN) and Nigerian Air Force (NAF). They were hosted to a combined passing out ceremony with 26 Generals and 47 mid-level officers who underwent management and entrepreneurship courses also at NAFRC.

It was gathered, 76 officers, were penciled for the courses they took to prepare them for retirement since they do not have many years in the civil service.
The Chief of Defence Staff (CDS) Gen. Abayomi Olonisakin while speaking at the ceremony, urged the retirees to be unrelenting in their support to security agencies particularly in the area of community intelligence gathering.

Reminding them of the recently approved enhanced welfare packages for retiring members of the Armed Forces by President Muhammadu Buhari, Olonisakin reminded them of the need to stay loyal and dedicated to the Federal Republic of Nigeria.
Olonisakin commended NAFRC Commandant, Air Vice Marshal Kingsley Lar and other staff for ensuring that Armed Forces personnel were exposed to the latest trends in global entrepreneurship and management training.

â€œI am aware of the reviewed curriculum designed to enhance the management and entrepreneurial skills of the participants. I urge the Commandant to continue these laudable initiatives for high quality human resource development that will be gainful to our personnel and society at large,â€Â said the CDS.
In his welcome remarks, AVM Lar the retirees where the stream one of the second batch for this year. He praised them for their unblemished military service, adding them to remain disciplined, law abiding and worthy ambassadors of the centre.

Lar who led dignitaries at the event round the centre for inauguration of some of the projects executed since his assumption of office in January, said he was glad to have officials of the Nigerian Customs Service (NCS), Department of State Services (DSS), National Intelligence Agency (NIA) and Defence Intelligence Agencies (DIA) participate in the courses for the first time ever.

â€œWhen l assumed command of this centre in January this year, my first impression was that this is a well-positioned centre with capacity to optimally deliver on its core mandate of vocational training not just for retiring personnel of the Armed Forces of Nigeria (AFN) but also for all Nigerians as well as the West African sub region.
â€œPursuant to this objective, I immediately developed my vision of command which is to harness the available human and infrastructural capital to transform NAFRC into a word class centre of excellence for international best practice in vocational training. The implementation of this vision was anchored on a three pronged approach of reengineering the people, processes and systems.

â€œTowards achieving this objective, my first emphasis was to develop and improve different aspects of our human capital resource. Next step was to update the training curricula of the various workshops in line with contemporary practices. As a corollary to this, several of the workshops had to be upgraded and equipped with modern and up to date equipment for training.

â€œTo complement the already existing vocational workshops, l approved the introduction of new vocational workshops in paint making, communications equipment repairs and floriculture. My emphasis was also on maintaining and improving the physical and social infrastructure of the centre.

â€œOn completion of the three anchors of my vision, l thereafter sought and obtained Defence Headquarters (DHQ) authorisation to admit members of para military agencies as well as government Ministries, Departments and Agencies (MDAs) to carry out training in NAFRC.
â€œIn line with my firm belief that NAFRC is adequately poised to train all Nigerians with vocational skills, the centre in conjunction with the Mushin Local Government Council has successfully conducted various vocational training for citizens in Mushin Local Government as well as youths in different military barracks across Nigeria.

â€œSpecifically, the centreâ€™s Agriculture Wing has conducted training and cultivated several economic trees and vegetable farms in Nigerian Army Cantonment Ojo, NAF Base Ikeja while that of the Navy Town Ojo is being finalised. This same gesture has also been extended to several other military formations in Abuja, Bauchi, Kaduna, Makurdi and Kerang in Plateau Stateâ€¦â€Â he said.