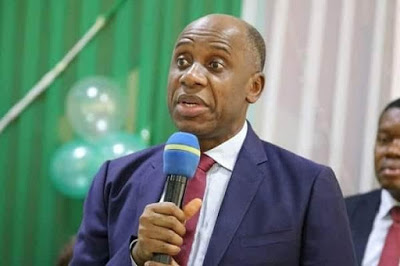 The Minister of Transportation, Rotimi Amaechi has said there is nothing wrong with calls for the restructuring of the country, but insists getting rid of hunger and poverty is more critical to the federal government.

Amaechi stated this on Sunday, while speaking on Channels Televisionâ€™s Sunday Politics.
â€œIf to you what is important is restructuring, I donâ€™t see anything wrong with restructuring. But Iâ€™m saying it is not the most critical problem we have.
â€œThe most critical problem we have is hunger and poverty, which is breeding insecurity,â€ he said.

There have been growing calls for restructuring from members of the rulingÂ All Progressives Congress (APC)Â and the oppositionÂ Peoples Democratic Party (PDP).

Amaechi who was Rivers State governor between 2007 and 2015, also said creating jobs for the people will keep them away from crime.

The country is grappling with rising kidnapping and killings, theeditorng.com reports.

Despite Economic Crisis, Nigeriaâ€™s Economy To Grow By 2 Percent In 2021 – CBN