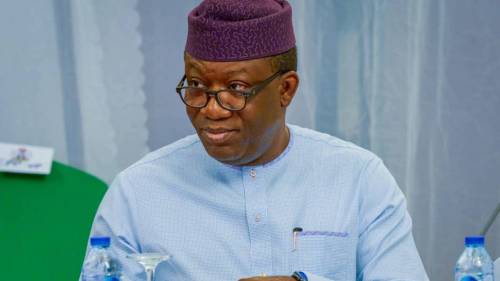 Ekiti State Governor, Kayode Fayemi, has said he is not in support of zoning.
Fayemi stated this while speaking on Channels Televisionâ€™s Sunday Politics yesterday.

The governor was reacting to various calls for Nigeria to have a president from the Southern part of the country in 2023.

Fayemi said he understands why those who feel marginalized are clamoring for the presidency, but insisted that â€œin a country that is multicultural, multireligious and multiethnic, one of the equilibrating mechanisms is to ensure that those in leadership represent the mosaic that the country isâ€.

According to him, â€œthere are excellent Nigerians from all parts of the countryâ€.
Fayemi who was in charge of the APC primaries in 2014, noted that candidates from any part of the country can participate in the primaries ahead of the next general election.

APC: Ortom Does Not Lack Character, He Wonâ€™t Return – Wike