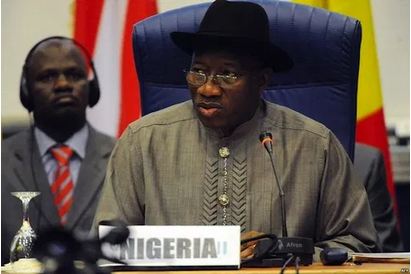 Former President, Goodluck Ebele Jonathan, has said that it is too early to talk about returning to office in 2023.
Speculations have been flying about, linking the Bayelsa-born politician to a possible return to the office he left 5 years ago.
But the speculations may have to continue as Jonathan could not give a definite position on his rumoured ambition.

Speaking briefly with reporters on Friday after attending an event organised by the Commonwealth Community Choir in Abuja, the nationâ€™s capital, Jonathan was asked if he would be joining the presidential race for 2023, and he said, â€œIt is too early to talk about that.â€

He also spoke about the issue of insecurity in the country and called for support for the Federal Government and the security agencies to overcome the challenges.

The former president noted that Nigeria was not the only country affected by insecurity, adding that he had his challenges to deal with while in office.

He also spoke about the political crisis in Mali, saying the situation has been brought under control following the intervention of ECOWAS.

President Muhammadu Buhari defeated the then incumbent President, Jonathan in 2015, he lost and conceded defeat to President Buhari of the All Progressives Congress (APC).
It was the first time an incumbent president would lose re-election and conceded defeat in the history of Nigeria.
This earned him accolades within and outside the country, leading to his emergence as ECOWAS special envoy.

Recall that some governors of the All Progressives Congress, APC, and chieftains of the party had recentlyÂ visited Jonathan,Â as pressure continues to mount on him to contest the 2023 election.

They visited Jonathan at his Abuja residence to felicitate with him on his 63rd birthday anniversary.