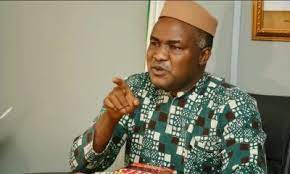 The Human Rights Writers Association of Nigeria, HURIWA, has described as primitive, disgusting and outrageous, the killing of a young girl in Lagos allegedly by men of the Lagos state police command at the venue of the Yoruba nation crossword convention at the weekend.

This is even as the rights group said the pursuit by dissatisfied citizens for self determination is permitted under international law provided the agitations are constructive and peaceful.

In a statement signed by its Executive Director, Emmanuel Onwubiko, HURIWA flayed the Lagos police command for threatening peaceful protesters whose crime was agitating for self determination.

The statement read in part: â€œWe expected that the police would by now have learnt hard lessons on how to behave as law enforcement officers in a constitutional democracy especially after the tumultuous national demonstrations against police brutality, torture and the deployment of extralegal killings of detainees as a tool of policing by the Nigerian Police Force which took place last year.

â€œThat epochal campaign by a mass of Nigerian citizens culminated in the reported abolition of the Special Anti Robbery Squad of the Nigerian Police Force known as the notorious killing Squad within the policing institution in Nigeria. But sadly, the police doesnâ€™t seem to have changed its modus operandi and modus vivendi even after that near revolutionary movement against police brutality.

â€œThe nationâ€™s court system has interpreted the relevant sections of the fundamental human rights provisions of the 1999 Constitution of the Federal Republic of Nigeria. The court of competent jurisdiction at appellate level gave an unchallenged verdict that peaceful protesters do not need to obtain any police permit but the commissioner of Police in Lagos State was busy baying for the blood of the innocent by threatening to deal with protesters who would show up for this weekendâ€™s rally by the Yoruba self determination agitatorsâ€.

â€œThe killing of this little girl whose only crime was that she came out legitimately to pursue economic advantage so as to feed herself.

â€œShe was gruesomely murdered by the blood thirsty operatives of the Lagos State police command.

â€œWe hereby demand the arrest, prosecution and jailing of the Lagos State police Commissioner for this egregious assault to our national psyche and for breaching the constitution of Nigeria by attacking peaceful marchers in Lagos and for this tragic termination of the precious life of this 14 year old girl in Lagosâ€.