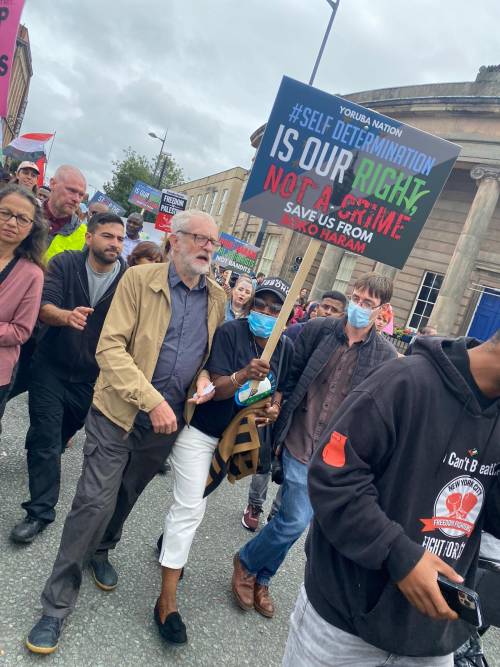 Yoruba Nation agitators on Saturday stormed the streets of Liverpool, the United Kingdom to continue their demand for a separate nation.

The agitators also demanded the release of Yoruba activist, Sunday Adeyemo, aka Sunday Igboho, who has been detained in Benin Republic since his arrest on July 19.

The protesters displayed various placards on which were written, “Self-determination is our right, not a crime, save us from Boko Haram”, “Stop the systematic genocide in Yorubaland”, “No Yoruba territory, no election in Nigeria 2023,” among other inscriptions.

The protest was held alongside another by some members of the UK Labour Party and others in an attempt to stop a controversial electronic arms fair from taking place.

One of the party leaders said, “I was born in Nigeria, it is a country which was formed by British imperialism after the slave trade, and today, we continue to suffer over there at the wrong hands of arms sold from this part of the world and we have some campaigners here who have banners saying, ‘Boko Haram are terrorists, not bandits’, ‘Buhari must go’, ’Nigeria is bleeding’.

SaharaReporters learnt on Monday that the Nigerian Indigenous Nationalities Alliance for Self-Determination (NINAS) vowed to go ahead with its planned one million march in front of the United Nations Headquarters in New York.

Separatist groups in the country under NINAS had earlier announced that they would hold a one million march to reiterate the demand for a referendum on self-determination and abolition of the 1999 Constitution of Nigeria.

NINAS is an umbrella body of self-determination movements in the South-South, South-East, Middle Belt, and South-West (Ilana Omo Oodua).

The protest will be led by renowned Yoruba historian, Prof Banji Akintoye; a respected scholar, Yusuf Turaki; Secretary-General of NINAS, Tony Nnadi; pioneer Commissioner for Education in Osun State and National Chairman of Ilana Omo Oodua, Wale Adeniran, among others.

It was learnt that Nigerians in the diaspora from the South-East, South-South, South-West, and Middle Belt’s clans, living in the United States of America, are being mobilised to stand up for their indigenous nationalities.

Akintoye, during a recent interview said, “We want to show the world our plight so that we can see solutions. We can’t keep quiet. The mega rallies held in the South-West were a success, and it is not enough, but we need the world to understand our current plight.

“The Federal Government has tried to clamp down on our rallies, and some of the peaceful protesters were attacked, and some were arrested. We decided the rally that we’ve held at home is not enough, we need to go international.

“This rally is coming at a time the UN General Assembly is going to be meeting in New York. This rally will help in solidifying self-determination agitation.

“The rally is going to be an inclusive one, we’ve done the necessary… We’ve formed an alliance — NINAS — and we’ve agreed on the rally. We’ll have Yorubas, Igbos, Middle Belt, other regions will be at the rally.”