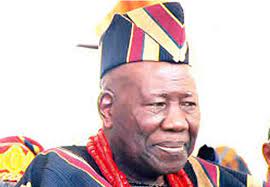 The Olubadan of Ibadanland, Oba Saliu Adetunji has declared that Bola Tinubu, National Leader of the All Progressives Congress, APC, will make a good president.

Oba Adetunji said Tinubu was a good man and he would use everything within his powers to support his push for presidency.

He spoke while receiving members of the Tinubu Vanguard, a support group for Tinubuâ€™s presidency project in Ibadan on Saturday, NAN reports.

A statement by Dr. Johnny Benjamin, the Director-General of Tinubu Vanguard, quoted the monarch as saying Tinubu had what it takes to propel Nigeria to the path of economic prosperity and sustainable development.

â€œTinubu is a good man and I will do everything within my power to support his candidacy for the 2023 presidential poll,â€ he said.

Many believes that Tinubu would contest the 2023 presidential election.

But, the former Governor of Lagos State is yet to declare his intentions to contest the election.

Despite his silence, Tinubuâ€™s campaign posters have been sighted in some states.