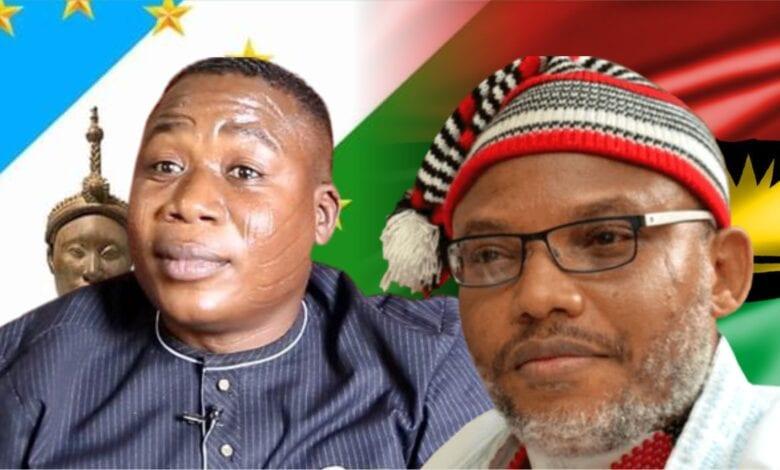 Kanu is the leader of Indigenous People of Biafra (IPOB) and founder of the Eastern Security Network (ESN), which agitates for a separate Biafran state for ethnic Igbos in southeast Nigeria.

Sunday Adeyemo popularly called Sunday Igboho is a Yoruba co-promoter of the idea of an Oduduwa Nation and a self-acclaimed defender of Yoruba territory against killer herdsmen in South West.

Igboho had led rallies across the South West, including Ibadan, Osogbo, Akure, Abeokuta, Ado Ekiti to sensitise and mobilise the people for his â€˜Yoruba Nationâ€™ agenda.

Kanu had been detained by the Federal Government after he was extradited a few weeks ago. Igboho was also arrested at Cardinal Bernardin International Airport, Cotonou Republic of Benin and detained at Brigade criminelle in Cotonou.

Here is a quick background on their arrest and other updates to catch-up with;

The Beninise court ruled Igbohoâ€™s wife, Ropo, should be released unconditionally as there were no charges against her.

The court, however, ruled that Igboho be remanded in police custody till Monday.

The two were arrested at the CadjÃ¨houn Airport in Cotonou last Monday while they tried to catch a flight to Germany.

Igboho was earlier declared wanted by the Department of State Services for allegedly stockpiling arms, an allegation he denied.

The lawyers handling the case reported after the proceedings that lgboho cannot be extradited to Nigeria for two reasons. According to him, they include: Contrary to insinuations, Nigeria and Benin have no Extradition Agreement.

Nigeria has not been able to come up with charges that could lead the court to order lgbohoâ€™s extradition to Nigeria.

The adjourned case was to allow the Federal Government bring up whatever evidence they may have against Igboho.

Nnamdi Kanu will on Monday appear before Justice Binta Nyako-led Abuja Federal High Court for the continuation of his trial.

The case of treason involving Kanu was before the judge when the agitator fled the country in 2017.

Justice Nyako had granted Kanu bail after which he fled Nigeria to Europe.

He was, however repatriated few weeks ago.

Kanuâ€™s lawyer, Aloy Ejimakor, however, argued his client never jumped bail, stressing that the Nigerian government made him flee the country.

His lead counsel, Ifeanyi Ejiofor, had disclosed that Kanuâ€™s trial will continue as scheduled on Monday despite Federal High Court judges going on recess

Kanu was ordered to be remanded in the custody of the Department of State Security (DSS) while the case was adjourned till July 26.

He faces an 11-count charge of treason, treasonable felony, terrorism and illegal possession of firearms but there are indications that fresh charges may be filed against him when the trial resumes.

Supporters of the embattled leader are planning to flood the Court premises as a sign of solidarity during the trial.