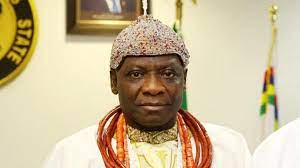 The Delta State Government has said it is not aware of the passage of the Olu of Warri, Ogiame Ikenwoli.

The Commissioner for Information, Mr Charles Aniagwu, stated this on Tuesday shortly after the State Executive Council meeting presided by Governor Ifeanyi Okowa in Asaba

Aniagwu said, â€œEach community in Delta State has laid down rules/tradition and ruling houses; so Itsekiri will not be different.

â€œTo us, thereâ€™s no controversy because we were not informed. The issue of the Olu of Warri is the same thing to all the communities.

â€œWhen a king dies, the community will write to the government, which will do all that is necessary for the purpose of smooth transition.

â€œIt is not entirely the issue of once the father dies, the son takes over.â€

The commissioner added that the council approved the amendment of the successor to the kingship of the Odion-Ologbo in the Ebrede kingdom, Ndokwa East Local Government Area of the state.

Aniagwu said for anyone to ascend the throne, he must be a graduate and a male child.