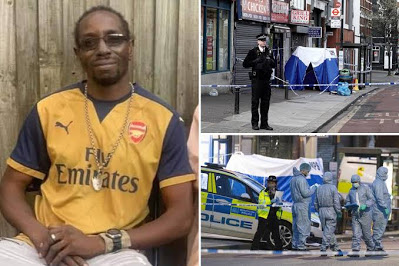 A 40-year-old Nigerian man, Tunde Fadayomi, has been stabbed to death in London, in the presence of his son.

The incident happened on Thursday evening, as the victim died after being stabbed in Willesden, North London.

According to The Mirror, an eyewitness said the single father was protecting his teenage son who was being threatened on a bus.

After he was repeatedly stabbed, Fadayomi died at the doorway of a chicken shop.

The witness, who chose to remain anonymous, said the attack was caused by an argument between Fadayomi and the suspect, as Fadayomi tried to protect his son from the suspect.

The suspect had accused Fadayomiâ€™s son and his friend of not allowing the bus to move. However, the vehicle was not moving because it was changing drivers.

â€œThe bus had stopped outside Willesden Garage and the man just kept shouting that he need to see his mum and then he started accusing the boys of being the reason why the bus wasnâ€™t moving,â€ the eyewitness recounted.

â€œI was on my phone and was thinking â€˜why is this grown man shouting at these boysâ€™ .

â€œThe boys were trying to calm him down but then he reached into his crotch and pulled out a blade. The boys ran off the bus and one said he was going to get his dad.â€

The eyewitness said that when Fadayomi came to the scene, he questioned the man about troubling his son.

â€œThey started shouting at each other before the killer took out the knife again and said â€˜I want to go and see my mum,â€ he said.

The eyewitness, who was a passenger on the bus, stated that the killer â€œcalmly walked awayâ€ after that accident as if he did nothing. The eyewitness also pointed out that no one bothered to go after the killer who went away â€œwithout any care in the worldâ€

â€œThis is a very dangerous man who needs to be taken off the streets before he strikes again,â€ the eyewitness said.

According to a police spokesperson, â€œPolice were called by London Ambulance Service at 5.11pm on Thursday, 29 April to a report of a man suffering from stab wounds on High Road, NW10. Officers attended.

â€œDespite the best efforts of the emergency services, the man, aged 40, was pronounced dead at the scene shortly after.â€