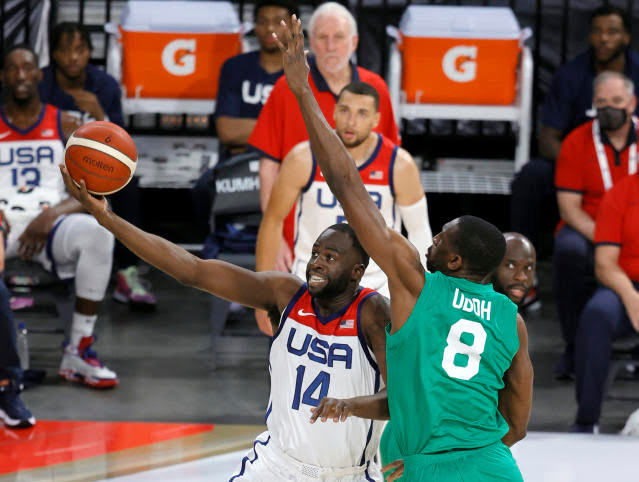 The Editorngr.com reports that Nigeria who had six NBA players and former NBA head coach Mike Brown at the helm, beat USA, inflicting the country’s first ever loss to an African Nation.

However, this Nigerian team includes Gabe Vincent, Precious Achiuwa and KZ Okpala of the Miami Heat, Chimezie Metu of the Sacramento Kings, Josh Okogie of the Minnesota Timberwolves and Miye Oni of the Utah Jazz with Jahlil Okafor and Jordan Nwora also on the bench, making it the largest contingent of NBA players on a single Olympic roster for any non-American nation in history.

â€œIâ€™m kind of glad it happened,â€ said U.S. head coach Gregg Popovich, noting that Nigeria has been practicing together since late June and the Americans for four days. â€œThat loss means nothing if we donâ€™t learn from it, but it can be the most important thing in this tournament for us to learn lessons from it.

â€œI donâ€™t think anyone should act nor would we act [like] that this is the end of the world.â€

Popovich said the difference in the game was three-pointers. Nigeria went 20 for 42, making twice as many as the U.S. It also won the rebounding battle 46-34.


The U.S. meanwhile had superstars like Kevin Durant, Draymond Green and Kevin Love while superstars including LeBron James and Stephen Curry withdrew from the Olympic team consideration .
Advertisement

Only once has an African nation ever challenged a U.S. menâ€™s senior national team â€” the U.S. beat Egypt 34-32 at the first world championship in 1950, according to USA Basketball records.