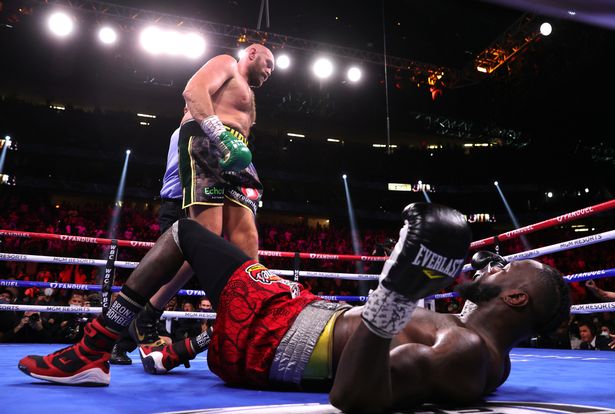 Both men hit the canvas with Wilder down in the third and 10th rounds and Fury down twice in the fourth.

But it was the champion who recovered best from the setbacks to stop his opponent in the penultimate session and ensure a concussive end to this long-running feud.

“As the great John Wayne said, I’m made of pig, iron and steal,” Fury said. “It was a great fight and worthy of any great trilogy fight.

“He’s got no love for me because I’ve beaten him three times.

“I’m a sportsman, I went over to him show some love and respect and he didn’t want to show it back. So I pray for him.”

Fury was meeting Wilder for the third time in three years following a controversial draw and a concussive stoppage.

The rivals were due to clash last summer but the fight was repeatedly rescheduled until it appeared to be off the table altogether when Fury agreed to fight Anthony Joshua.

But Wilder took legal action in order to secure his shot at Fury – and his old belt.

Last year the American blamed his defeat on his 40lb walk-on suit and he pared down his costume this time.

After a brief delay due to an issue with his gloves, Wilder marched in wearing a red and black fur robe.

Fury entered the arena to a mixed reception with only a couple of Union Flags on display given the travel ban which prevented his fans flying into Sin City.

The Brit donned a gladiator’s outfit complete with helmet as he slowly meandered his way towards his waiting foe.

The warring duo were separated by a string of security guards for the introductions but were soon released to resume their rivalry.

And it was Wilder who began on the front foot, throwing almost exclusively to the body for the opening minute.

Fury by contrast was slow out of the blocks but did land the best punch of the first round with a straight right hand in the dying seconds.

He repeated the trick at the start of the second round before repeatedly attempting to tie Wilder up on the inside using his three-stone weight advantage.

Fury was given a stern warning for doing just that in the third session before Wilder turned up the pressure.

But it was Fury who scored the first knockdown with a huge right hand, dropping Wilder with 20 seconds of the round remaining.

The bell interrupted Fury’s attempts to finish the job and Wilder turned the tide in the fourth, dropping Fury with a right hand with a minute remaining.

He did so again with 10 seconds to go but Fury managed to haul himself up and beat the count.

Wilder smelled blood in the fifth stanza but he was rocked by a right hand from Fury and appeared to labour somewhat through the rest of the round.

Both men appeared to be tiring in the sixth round as Wilder landed a clubbing jab which was answered by a looping right.

Fury was the betting favourite at the halfway mark and appeared to have recovered from his trip to the canvas as he landed another thudding right hand.

An uppercut then had Wilder in trouble against the ropes as Fury pushed for the finish.

Fury had out-landed Wilder by two-to-one by the eighth session and he cut the far more relaxed figure as his challenger continued to fade.

Wilder had to convince the doctor to allow him to continue but other than a fleeting rally, it was Fury who dominated again to extend his lead on the scorecards.

And Wilder was down again in the 10th as Fury looked to put an exclamation point on his victory. The American rose again and had Fury in trouble at the bell as the trilogy swung one way and then the other.

Fury crashed in a right hand against the ropes at the start of the championship rounds before he finally stopped Wilder with a bludgeoning right hand which sent the weary challenger crashing to defeat.

Earlier on the heavyweight-themed undercard, Efe Ajagba and Frank Sanchez fought like two prospects fearful of losing their unbeaten records.

Only a handful of punches had been landed by the halfway stage but Sanchez injected some urgency into proceedings when he forced Ajagba to take a knee.

But because he then landed a clean punch while his opponent was grounded, the referee ruled no knockdown.

Ultimately the Cuban didn’t need it as he ran out a comfortable winner on all three judges’ scorecards.