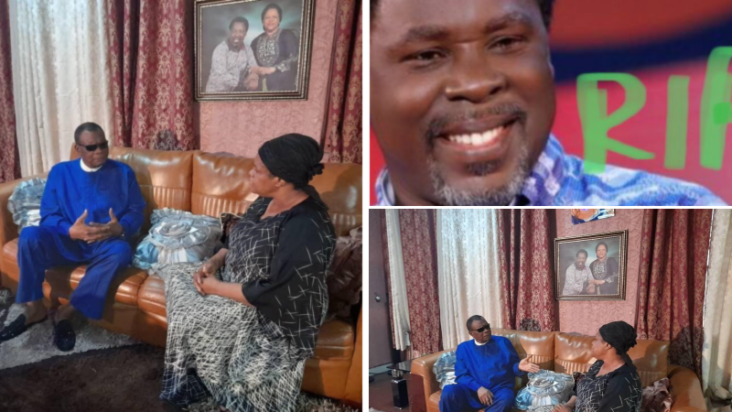 Abiara, while commiserating with her during the Wednesday visit, said the works of Joshua would not die. He urged his widow to be strong and remain faithful to the call of God.

Joshua was the founder of the Synangogue Church of All Nations with its headquarters in Ikotun, Lagos. He died on June 5 after a church programme.

Speaking in Yoruba, Abiara further said pastors were devastated when the news came that Joshua had died.

He told Evelyn that God was in the best position to tell why her husband passed on at an early age noting that the work ahead was much.

He pleaded with her to forgive him for coming late saying, â€œGod will be with you. I am really sorry I did not come early to come and greet you. I thought there would be too many people around. That was why I sent a message ahead.â€

He added, â€œThe work that God did through him showed he was a real man of God whether you believed him or not. He was our son. When he was alive I called him several times and I loved his work. Who are we to query God? If we donâ€™t understand, God understands.â€

Abiara urged the widow of the late prophet to take time to eat and be encouraged.

Abiara is the only high-profile Nigerian cleric who has identified with the bereaved family since it lost its patriarch known to the world as TB Joshua.

Throughout his lifetime, Joshua was rejected by the Christian body in Nigeria over his unorthodox practices.

Only three days after his death did the Christian Association of Nigeria send a condolence note to his widow.