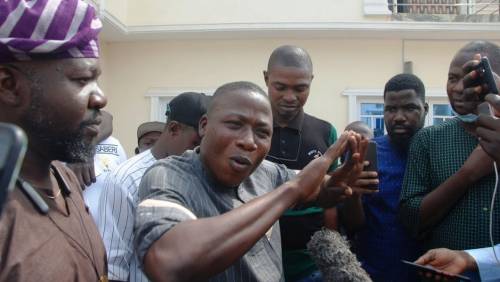 Igboho said some politicians have been “pressurising” him and his wife to sign documents they could use to beg President Muhammadu Buhari and his political circle on his (Igboho’s) behalf.

Yoruba Nation agitator, Sunday Adeyemo, popularly known as Sunday Igboho, has revealed that some yoruba political leaders are asking him to beg the Presidency.

Speaking through his lawyer, Yomi Alliyu, the separatist agitator said any document claiming he authorised any politician was fake.

In a statement signed by Alliyu, Igboho said he was being pressured by politicians who were unconcerned about his incarceration in Benin Republic.

The statement reads, “We have been reliably informed that some politicians are pressuring our client and his wife to give them endorsement to use at the presidency to justify their new found love and/or defection to the All Progressives Congress and/or curry affection from those in power.

“Let the whole world be aware, especially the presidency, that Sunday Adeyemo is totally apolitical with no special love or hatred for any political party as he has friends in all.

“He, however, respects the six elected governors of the south-west states as authentic representatives of his Yoruba race. Any document purportedly signed by Igboho or his wife endorsing, empowering or making anybody his mouthpiece other than his lead counsel should be disregarded and taken as fake.

“It is disheartening that a discredited politician with disreputable pedigree in Yoruba race and another retired security officer are pressurising our client and his wife to give them endorsements to Yoruba youths and the presidency without considering his unlawful incarceration in the Republic of Benin and health issues.”
Igboho was arrested at an airport in Cotonou and locked up in a prison facility in Benin Republic when attempting to jet out to Germany in July.

He had fled Nigeria after the Department of State Services (DSS) invaded his residence.

Igboho was subsequently declared wanted after weapons were discovered in his Ibadan residence. He, however, denied ownership of the weapons.