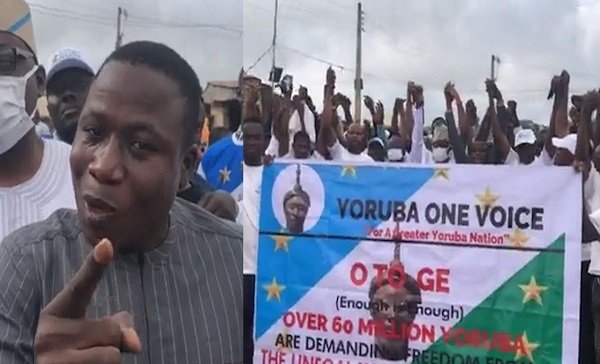 It was gathered that the secret police will carry out a forensic analysis of the call logs, messages and other contents on the phones of the 13 aides of Igboho who were arrested during Thursdayâ€™s raid on his Soka, Ibadan residence.

Sources have disclosed to The PUNCH that DSS investigators hoped to track down those offering financial and material support to the agitation for the creation of Yoruba Nation.

It was also gathered that the secret police would liaise with the International Criminal Police Organisation (INTERPOL) to apprehend Sunday Igboho wherever he may be hiding.

â€œThe service is in the process of liaising with the Interpol to track down the fugitive. He will be watch-listed so he can be arrested wherever he may be found,â€ a DSS operative said.

â€œOur forensic experts would comb the call logs and other contents of the phones of all the suspects in custody. We hope to harvest a trove of information that could lead to Igbohoâ€™s financiers and collaborators in the coming weeks.â€

Another top DSS official disclosed that the phones seized from Igbohoâ€™s home would be examined and this could also expose the identities of those sponsoring him.

â€œIt is standard procedure to process suspects and their phones. Igboho didnâ€™t know we were coming, hence he was unable to take away his passport and other items. Operatives are currently searching through the seized phones, WhatsApp chats and other things.

â€œThis could expose the identities of people sponsoring Igboho and those supporting him,â€ the source said.

Troops eliminate terrorists after attack on police convoy in Borno