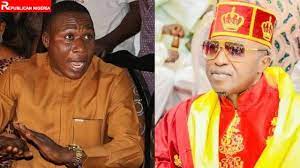 The camp of Yoruba nation agitator, Sunday Adeyemo alias Igboho, on Saturday denied that he was about to soft pedal or dialogue with the federal authorities.

Reacting last night to Fridayâ€™s offer by the Oluwo of Iwo, Osun State, Oba Abdulrosheed Akanbi, to intervene in the face-off between government and Igboho, the spokesman of the activist, Olayomi Koiki, said there had been no contact between the monarch and the agitator lately.

Koiki also denied that Igboho was about to drop the agitation for a Yoruba nation.

But the Oluwo said only Igboho â€œcan speak for himselfâ€ on whether he is ready for talks of not.

â€œNobody can speak for him,â€ he told The Nation on the phone last night.

The Presidency itself appeared to play down the matter when contacted on Saturday.

A source said only the Director of State Services (DSS), the Nigeria Police Force and the Attorney-General of the Federation, Mr. Abubakar Malami, SAN, could determine Igbohoâ€™s fate.

It was the DSS that coordinated the raid in the activistâ€™s Ibadan residence penultimate Thursday, arrested some of his aides and declared him wanted.

Igboho has since gone underground.

Koiki, his spokesman, told The Nation yesterday that he was not aware of any contact lately between Oba Akanbi and Igboho.

â€œNot at any time, not even a single call,â€ he said.

But he admitted that Igboho visited the oba way back in 2018 to reciprocate a similar one by the traditional ruler to the activist.

He said it was on that occasion at the Oluwoâ€™s palace that the photograph of Igboho prostrating for the oba, now trending on social media, was taken.

â€œThe news that Chief Sunday Adeyemo visited the Oluwo of Iwo, Oba Abdulrasheed Akanbi is not true,â€ he said.

â€œThe 2018 picture was taken during a return visit after he (Oluwo) came to chiefâ€™s house.â€

He insisted that Igboho has also not dropped his agitation for a Yoruba nation.

He said any claim to the contrary is a lie.

He promised to give a comprehensive response soon by way of an audio message.

Oluwo: Nobody can speak for Igboho

â€œIf he wants to continue fighting the way he has been fighting, let him go ahead.

â€œIf he wants his normal life back, let him go for peace. It is either he goes for peace or continues with â€˜catch me if you can,â€™ with the DSS.

â€œThe option is there for Igboho, but I wonâ€™t advise him to talk or say a word until peace is made.

â€œTo return his life back to normal is my desire.

â€œAnybody that wants to lead the agitation can go ahead. It is Igboho that has something to protect. He has a life.

â€œHe is our son, we wonâ€™t allow something bad to happen to him. He has a name.

â€œSunday Igboho does not deal with some of those people who say they are speaking for him.

â€œWhy didnâ€™t you ask them when they spoke with Igboho?

â€œIt is unfortunate that the majority of them are pushing him. They will just continue to push him until they kill him.

â€œTo the extent that the DSS could claim responsibility that they attacked his house. They (DSS), said: â€˜We went to Igbohoâ€™s house and we killed two people.â€™

â€œI think they just want to push him into trouble. Even before the current agitations, he was not poor. He was only misinformed and he has realised this.

â€œI would advise Igboho not to say anything against the government. He should have his life to protect. He should keep quiet till we solve the present problem.

â€œThose people pushing him cannot do anything for him, rather when he gets into trouble, they will all run away and leave him to solve his problems.

â€œThey have pushed him into trouble. He has a house, and he canâ€™t go there.

â€œHis wife is in trouble. His people are in a problem. His family members are in trouble.

â€œHe is now running like a fugitive. He has been declared wanted. His passport has been seized.

â€œThose people pushing him, why canâ€™t they come to the street and continue from where he stopped?

â€œThose who are speaking for him right now are not his closest aides.

â€œSome of them speaking for him are using him to make money.

â€œI told him that some of the people making noise were just pushing him. He did certain things that were beyond him, especially the idea of going to open the border. No government would allow that.

â€œSome of them are trying to justify their action by comparing Igboho with the bandits in the North. Do the bandits have a house? Do they have a name?

â€œIgboho has a house; he has exotic cars in his compound. He had been made a long time ago. Some of these people pushing him just want to make money.

â€œWe will speak to the government to forgive him. This same government honoured MKO Abiola. Those who did bad things to Abiola did not honour him.

â€œAbiola was not on good terms with Buhari, yet it was the same Buhari that honoured him.

â€œThe Igbo elders may not speak about Nnamdi Kanu and plead on his behalf and assure the government that they would tell him to stop some of the things he is doing.

â€œBut we as Yoruba elders would not allow things to get worse. What we are doing right now is to find a way of getting him out of the trouble.

â€œHe has a house, he canâ€™t live in it. He has a car, he canâ€™t ride it. His German passport has been seized.

â€œIf the Igbo do not talk about the activities of Kanu, we would talk about our own before they start killing people in Yorubaland.

â€œWould you say how unknown gunmen have been killing people in the South East is good? Is that what we want in Yorubaland?

â€œWe will draw his attention to it that â€˜young man, where he is going is not good.

â€œI think the media hype entered Igbohoâ€™s head and those who are making money from the Diaspora are not telling him the truth.â€

â€œThe Oluwo is one of those who are supporting the government and offering advice from time to time. We have read what he wrote,â€ the source said.

â€œBut only the DSS, the police and the AGF can determine how Igbohoâ€™s case will be treated. They can decide his fate.â€

A security source said: â€œIt will be difficult to adopt a different approach for Igboho. Before negotiation, he must first of all respect the law of the land by surrendering.

â€œHe is promoting secession, which is treasonable. The question of peace talks is political. Let him honour security agenciesâ€™ summons before seeking refuge.

â€œSecurity agents recovered arms from his residence .We have some of his aides with us and they have made some revelations. He needs to come and clarify a few things.â€

The Oluwo, in his Friday letter to President Buhari, pleaded for forgiveness for Igboho and asked that the order for his arrest be â€˜slowed downâ€™ to enable him (oba) bring him to Abuja for possible peace talks.

He was confident that Igboho would drop his agitation for the creation of a Yoruba nation.

â€œHe has pledged his readiness to listen to us,â€ the Oluwo said.

He added: â€œI promise your Excellency that Igboho will mind his steps henceforth. He has suffered a lot.

â€œHe would step down agitations. I will bring him for a peace talk at an appropriate time.â€

â€œHe visited my palace sometime in 2018. I give pieces of advice when sought. Instead of Igboho to distinctively differentiate between agitation towards government and inter groups activism, he failed.

â€œAt a point, he abused stakeholders with spurious allegations. I was the first on the list for drumming support for one Nigeria.

â€œAs a father, Iâ€™ve personally forgiven him. And Iâ€™m personally beseeching your Excellency as the number one citizen of the Federal Republic of Nigeria to demonstrate your magnanimity by forgiving our promising son, Chief Adeyemo Sunday Igboho.

â€œHe is a novice in handling issues against the government. He is a gift to us in Yoruba. He has pledged his readiness to listen to us.

â€œI appeal to your Excellency to slow down security trail on Sunday Igboho. I have the assurance adhering to this piece will go a long way in strengthening the unity of Nigeria.

â€˜I promise your Excellency that Igboho will mind his steps henceforth. He has suffered a lot. He would step down agitations. I will bring him for a peace talk at an appropriate time.â€

The DSS had said in a statement on the joint security raid of Igbohoâ€™s residence that two of his men were killed and 13 arrested during the early morning raid.