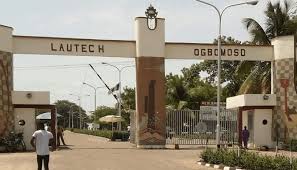 Editor Nigeria reports that Students of Ladoke Akinola University of Technology (LAUTECH) Ogbomoso on Friday shut gates of the institution in protest over the death of a final-year student, Asefon Nifemi Benard.

The deceased, a graduating student of the Department of Animal Nutrition and Biotechnology, it was gathered, died after falling into a soak-away in his hostel.

The university management confirmed the sad incident in a statement by the institutionâ€™s registrar, Dr. Kayode Ogunleye on Friday.

The management, while appealing to the protesting students for calm, noted Nifemi died off-campus on Thursday.

One of the students, who pleaded anonymity, said Nifemi, after falling into a soak away, died on Thursday evening owing to little delay by staff of the LAUTECH Teaching Hospital.

He said the incident occurred at his hostel along 1500LT, school area.

Another student, who was privy to the incident, said the deceased fell into the soak-away pit while attempting to switch on electricity.

He added that the shock from the electricity paralyzed him as he fell into the pit.

He further explained Nifemi was thereafter rushed to LAUTECH teaching hospital but could not get immediate medical attention, which was suspected to have led to his death.

The source said: â€œMedical personnel on duty said they had to get a call from the Dean of Students Affairs before attending to him. The deceased friends decided to take Nifemi to Bowen Teaching Hospital; he died before getting to the hospital.

â€œNifemiâ€™s death has made some aggrieved students to shut down the university. They are protesting that their colleague could have been saved if the health institution had taken the case as an emergency and gave him the necessary treatment before asking of details like the DSA.â€