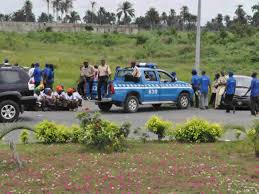 Six persons have been confirmed dead and three others injured in a crash at Ndi-Uduma village, Oso Edda community, in the Afikpo South Local Government Area of Ebonyi State.

The accident, which happened on Wednesday, involved a Mack truck conveying stones from Amasiri community, in the Afikpo North LGA of the state, and a Sienna minivan carrying passengers from the Okigwe LGA of Imo State.

A community source, Mr Sunday Ugbor, told PUNCH Metro that the truck collided with the Sienna vehicle around the Ihere stream in the area.

“As I speak to you now, six persons have been confirmed dead and three persons are being moved to a hospital,” he added.

According to him, the vehicles had a head-on collision when the truck driver “impatiently drove and veered onto the lane of the driver of the Sienna minivan, on approaching the Amasiri Junction.”

He stated that the drivers of the two vehicles survived the crash, while the corpses of the passengers were deposited in a mortuary

In this article:Accident, Ebonyi State