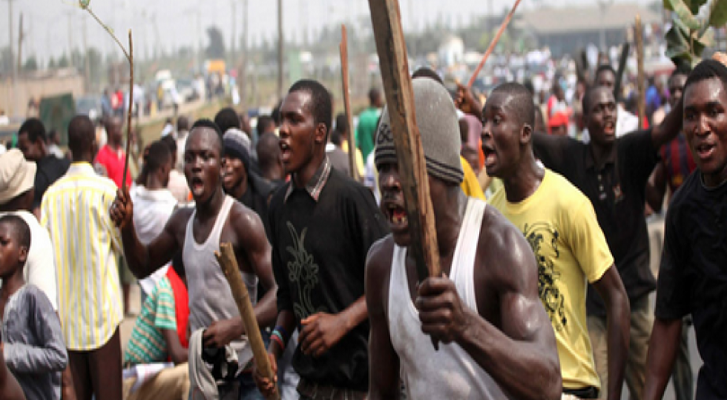 Clash on Tuesday between soldiers and ticket touts at the popular Ladipo auto spare parts market in Lagos has left a number of persons dead.

But the casualty figure is uncertain.

While some said three persons were killed by the soldiers, others put the figure at five.

A trader said, â€œSome soldiers came here and started shooting directly at us. They aimed at us, one of them even positioned well to get a good view of the target before shooting.â€

Many were reported injured.

The Nation gathered that a fight ensued between soldiers of the Operation MESA and suspected area boys said to be in charge of ticketing which led to the soldiers shooting.

Another account said personnel of the Nigerian Air Force (NAF) opened fire on traders following a disagreement over an article bought from a trader.

A fight ensued and the military man called for backup from his colleagues.

A mechanic said a military patrol vehicle was vandalised and set ablaze by a mob.

Another eyewitness told The Nation that a young boy was among those killed while four others sustained gunshot injuries and were rushed to hospital.

A man, who gave his name as Paul, said they scampered for safety when they started hearing gunshots.

â€œWe were here at our shops when soldiers came and started shooting. We all ran for our lives but some of our brothers were killed, others got injured.

â€œWhat we heard was that one of the soldiers had tried to return an item he got from a shop and that was what led to the scuffle,â€ he said.

Another trader, Emeka who claimed his brother was among those killed, decried the unfair treatment meted to them by the operatives.

â€œMy brother has been killed. The operatives intentionally shot at us instead of shooting towards the sky. I even saw one of the operatives who positioned himself in order to get a good view of his target before shooting.

â€œA young boy was also among those killed,â€ he lamented and declined further comments.

A beverage seller, Iya Rukaya, confirmed a young boy was killed but added that she did not know how many people died.

At the time our reporter visited, calm has been restored although broken bottles could still be seen on the ground.

Most shops were closed while traders still around were in clusters discussing the incident. Also, there was no presence of policemen or military operatives on sight.

The Air Force denied that its operatives killed anyone at the scene, insisting they acted professionally and in response to a distress call.

The Force one person died.

NAF spokesman Air Commodore Edward Gabkwet told The Nation that the serviceâ€™s personnel attached to the Operation (OPs) MESA were in the market in response to a distress call.

He said a call was put across by traders about a fight going on between a soldier of the Nigerian Army (NA) and a civilian debtor.

Gabkwet said upon receipt of the call, the team moved to the market but were attacked by angry traders who pelted them with stones.

â€œTwo of our operatives sustained injuries,â€ he said, adding, â€œWe are going to investigate the incident to know what really happened.â€

The spokesman for Nigerian Armyâ€™s 81 Division, Major Olaniyi Osoba also said the matter was being investigated.