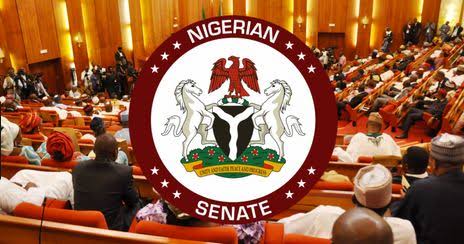 The Senate Tuesday moved against rampant cases of kidnapping in parts of the country as a bill proposing life imprisonment for the offence of kidnapping or any form of abduction, wrongful restraint and confinement passed second reading at the Red Chamber.

This is just as the Senate while passing a bill for the establishment of Nationwide Emergency Communications Service also referred President Muhammadu Buhari’s $4.05 billion loan request to its Committee on Local and Foreign Debts.

The anti-kidnapping bill sponsored by former governor of Ogun state, Senator Ibikunle Amosun, seeks to, among others, introduce stiffer punishments and punitive measures to combat and prevent kidnapping in Nigeria.

Leading debate on the bill, Senator Amosun observed that kidnapping is a major security challenge confronting Nigeria in recent times adding that the light punishment for the offence has continued to make it grow and assume horrendous dimensions with a negative impact on the economy.

According to him: “The impact of kidnapping on both economic and daily life has been devastating. For many Nigerians, kidnapping is far more devastating than the carnage of Boko Haram in the Northeast, or the carnage in the middle belt over land, pasture and water use between farmers and herders.

“In the rich oil South-south, kidnapping is often seen as a manifestation of the insurrection over how oil revenue is distributed.

“Overtime, the pool of potential victims has shockingly been expanded. No, most victims are often poor villagers, sometimes kidnapped indiscriminately, a departure from the targeted kidnapping of wealthy people. They struggle to pay ransoms because of their relative poverty; and this has resulted into many victims being killed in the process”.

The ranking Senator lamented that, “Nigeria has one of the rates of kidnaps for ransom of both locals and foreigners in all of Africa.”

He added, “while the insurgents in the North East now thrive on the proceeds of kidnappings, criminal elements in the South East and South West are also having a field day. Infact, kidnapping has now become a big and lucrative business.”

Similarly, Amosun quoted an online report of July 13, 2021, which stated that an average of 13 persons were abducted daily in Nigeria in the first half of 2021, bringing to 2,371 the number of reported persons kidnapped in the country within the first six months of the year.

He bemoaned the worrisome development, warning that the trend has the potential of negatively affecting Nigeria’s Foreign Direct Investment.

The federal lawmaker stated that the bill, therefore, seeks to introduce stiffer punishment for the offence of abduction, wrongful restraint and confinement for ransom.

His words: “This bill also provides more punitive measures for ancillary crimes flowing from the commission of the crime of abduction, like death or grievous harm. To achieve the deterrent effect, life imprisonments is proposed for the offence of kidnapping, particularly where death results from the act.

“The law is made stricter by ensuring that recipients of any proceeds of the act of kidnapping are heavily sanctioned with term of imprisonment of up to 30 years”.

The bill, according to him, also proposes to give the Inspector General of Police wider powers to enable adequate policing of the crime of kidnapping.

The Senate President, Ahmad Lawan, thereafter referred the bill after it was exhaustively debated, to the Senate Committee on Judiciary, Human Rights and Legal Matters headed by Senator Opeyemi Bamidele and has four weeks to report back to the upper chamber.