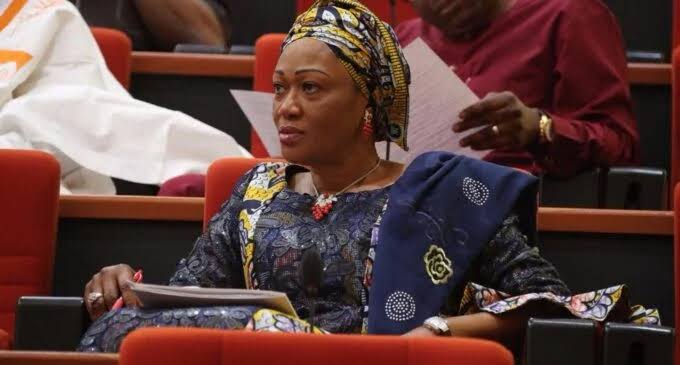 Remi Tinubu, senator representing Lagos central, was involved in an altercation with some Nigerians who attended the south-west zonal public hearing of the constitution review on Wednesday.

The event held at Marriott Hotel in Lagos, with residents queuing to register before they were allowed entry into the hall.

While residents waited on the queue, Babajide Sanwo-Olu, governor of Lagos, came in and was ushered in through the backdoor, after which the front door was shut.

The ushers then informed those on the queue that registration had closed for the day.

However, the development did not sit well with those who were unable to register, and they refused to leave the queue.

It was at this moment that some lawmakers from Oyo state passed the queue and were about to be ushered in, leading to commotion at the front entrance.

As the shouts continued near the front door, with those on the queue insisting that they had been unfairly treated, the Oyo lawmakers were about to be hurriedly ushered through the backdoor, but the people followed them, preventing them from being allowed into the hall.

However, after some consultation with the personnel at the door, Tinubu showed up at the backdoor to allow the lawmakers in.

As she was about to do this, a woman, who complained about being denied entry, decried the partial treatment and voiced out her frustration.

Seeing this,Â the senator beckoned on her and two others, only to call the woman a â€œthugâ€ for speaking too loud.

The statement made by Tinubu infuriated those on the queue, who insisted that such derogatory word shouldnâ€™t have come from the senator.

The senator was asked to apologise but she refused.

â€œI will not apologise for what I said. I saw it and I said it,â€ the senator maintained.