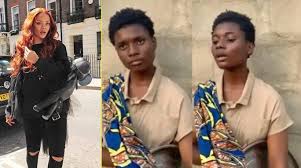 A 17-year-old Nigerian hawker who went viral after she was filmed singing with a very beautiful musical voice, has revealed that R&B singer, Rihanna contacted her.

Recall that the girl known as Salle, was captured on tape singing with a voice so angelic that it amazed many social media users.

In a video that made rounds on social media, the young girl who held an empty tray was asked to do a freestyle on a beat and she sang beautifully.

She revealed via a tweet on Twitter that Rihanna called her.
”I got a call from Rihanna,” 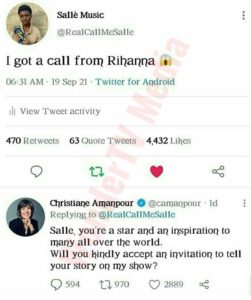 Salle has also been invited by Christiane Maria Heideh Amanpour, a CNN journalist and television host, for an interview.

Salle, you are a star and an inspiration to many all over the world.
Would you kindly accept an invitation to tell your story on my show?”