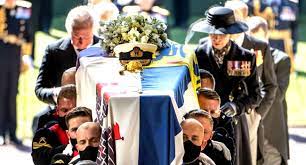 Prince Philipâ€™s coffin has been interred in the royal vault of St Georgeâ€™s Chapel.

It was placed on a catafalque on a marble slab and lowered into the vault by an electric motor.

The other two are George IV and William IV.

Horns were played as his coffin was lowered down.

A blessing was given by the Archbishop of Canterbury before the choir sang the national anthem, â€œGod Save the Queen.â€

The members of the royal family looked up as the choir sang while the queen bowed her head.

The 94-year-old monarch was then led out of the church by the archbishop and followed by her family members.

Prince William, her grandson, was seen glancing back at the vault as he left his pew.