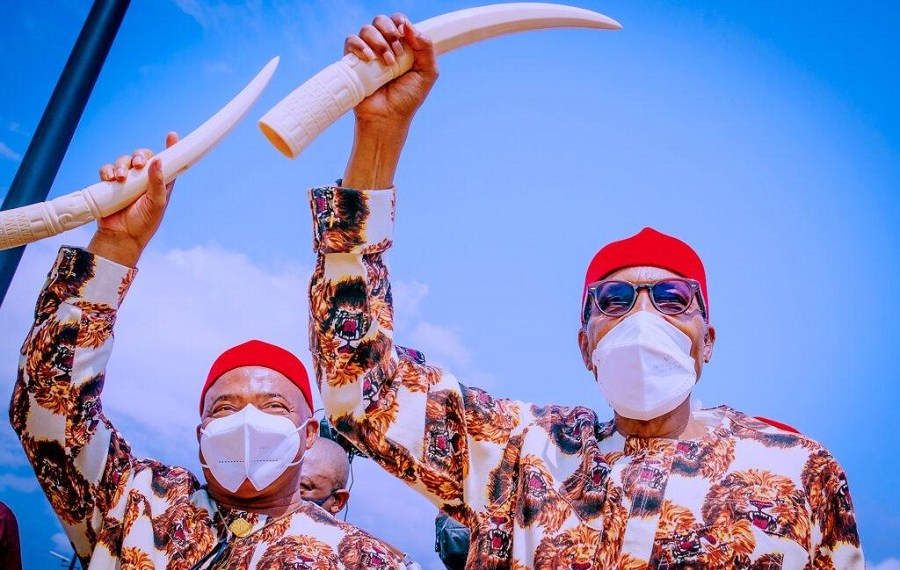 President Muhammadu has commended the Igbos for their resourcefulness while admitting that they are in charge of economic activities in Nigeria.

The President stated this in a message posted on his Facebook page a day after his Thursday’s visit to the Southeastern state of Imo.

In his message, the President thanked the people and government of Imo State for the warm welcome accorded him during his visit two days ago. He also commended Governor Hope Uzodimma for impactful projects which he has initiated in the state, citing that “the Igbos will especially benefit from this ongoing infrastructure revolution, because, as a group, they are truly the most enterprising.”
What President Buhari said
While commending the Igbo’s for their enterprising nation, the President said, “There is no town you will visit in Nigeria without seeing the Igbos being in-charge of economic activities. The evidence is there for everyone to see, that Igbos are in charge of Nigeria’s economy.

“It is therefore unthinkable for me that any Igbo man would consider himself not to be a part of Nigeria.

While stating that is pleased with Uzodinma’s performance in the state, he reiterated that the Federal Governent would ensure the completion of key projects in the South East region.

“Let me again say that I was very pleased with what I saw in Imo State, and I would like to assure that I will support Imo State and the entire region within the Constitution of the Federal Republic of Nigeria.

“The Federal Government will complete all ongoing key projects in the South East, including the 2nd Niger Bridge, and other major highways, as well as the railway lines and routes linking the region with other parts of the country.

What you should know
President Buhari was in the state for a one-day working visit to inaugurate projects executed by Governor Hope Uzodinma’s administration.
His visit was however greeted with apathy, as residents of Imo State and neighbouring Southeastern states were forced to stay at home following a sit-at-hope order allegedly ordered by the Indigenous People of Biafra (IPOB).