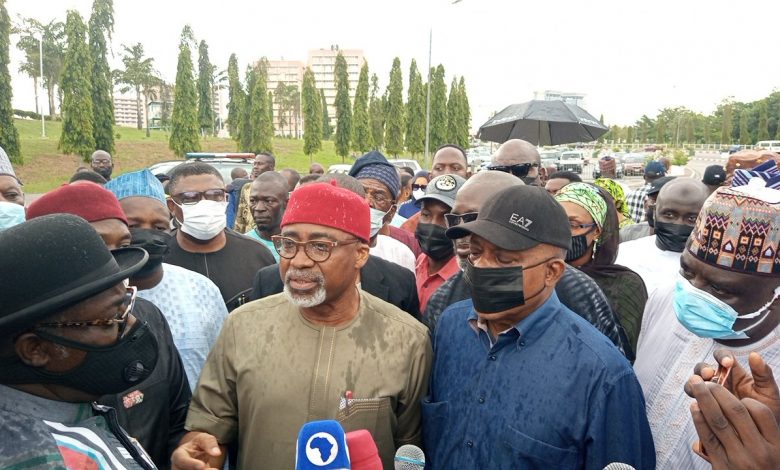 The opposition Peoples Democratic Party (PDP) on Wednesday stormed the National Assembly in protest to demand lawmakers stop the confirmation of Lauretta Onochie as a commissioner of the Independent National Electoral Commission (INEC).

The PDP leadership, led by its chairman,Â Prince Uche SecondusÂ said Onochie should not be confirmed as an INEC commissioner because she is a card-carrying member of the ruling All Progressives Congress (APC) and presented a letter to that effect to the screening committee.

The Editor NigeriaÂ reports Onochie is President Muhammadu Buhariâ€™s Personal Assistant on Social Media and was nominated by the President as an INEC commissioner representing Delta State.

She alongside five others were nominated by the president but there have been widespread criticism and rejection of Onochieâ€™s candidacy because of her partisan political affiliation.

On Wednesday, the PDP leadership stormed the National Assembly on the grounds of her being a registered member of the ruling All Progressives Congress (APC), which the main opposition party noted violates the provisions of Section 14(2a) of the Third Schedule of the 1999 Constitution, as amended, which states thatÂ â€œa member of the commission shall be non-partisan and a person of unquestionable integrity.â€

He said:Â â€œWe are here to make a final point, to make final rejection of Onochie. We donâ€™t need her in INEC, she is going to pollute the system. It is very clear that she will cause problems for INEC; what we need from Mr President is to conduct a free and fair election, she will pollute the atmosphere of INEC, she is a card-carrying member of APC, she is a specialist in manipulation,

â€œWe have presented our protest letter to be delivered to Senate President.â€

Their letter of rejection, signed by the PDP National Secretary, Senator Umaru Ibrahim Tsauri and dated 30th June 2021 entitled, â€œRejection of the Nomination of Lauretta Onochie as INEC Commissioner,â€ and addressed to The Chairman, Senate Committee on INEC, read in part:Â â€œThe National Working Committee (NWC) of the Peoples Democratic Party (PDP) has learnt of the nomination of Mrs Lauretta Onochie as a Commissioner in INEC by Mr President and Commander-in-Chief of the Federal Republic of Nigeria.

â€œThe nomination which was read on the floor of the Senate and forwarded to your committee for screening has created a lot of misgivings in the court of public opinion and judgement.â€

â€œOur Party considers it as important to bring to the attention of your committee the fact that our duty is to let you know that the National Assembly must endeavour to do things right and in accordance with the dictates of the laws of the country.

â€œThe Nigeria Constitution 1999 as amended clearly prohibits people like Mrs. Onochie, who is very partisan, in fact, a card-carrying member of a political party to be appointed into INEC as an electoral umpire. Section 156(i)(a) and third schedule, Part 1, Item F, Paragraph 14(1) of the Constitution have outrightly disqualified her.

â€œWe are, therefore, writing to ask the Chairman to save the Senate President, the Senate itself and Mr President from being ridiculed.

â€œWe call on your committee to reject the nomination of Mrs Onochie because she cannot be neutral or independent as she is factually known to be an unrepentant card-carrying member of the APC with an uncountable number of proofs.

â€œHer confirmation will be a wholesome abuse of democratic tenets and dragging the reputation of the President and the Senate in the political mud.

â€œPlease, donâ€™t make an avoidable legislative and political mistake for the country.

â€œKindly, accept the assurances of our highest consideration and esteem regard.â€