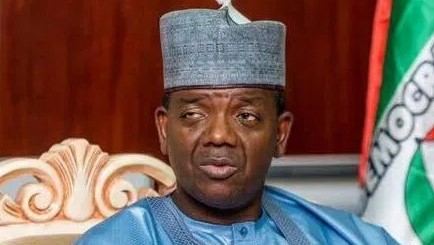 The Peoples Democratic Party has protested against the decision of Zamfara State Governor Bello Matawalle to defect to the All Progressives Congress (APC).

It warned that the law only allows defection in a situation of crisis in the party the defector belonged to.

The Editor Nigeria gathered that Governor Matawalle and some federal and state lawmakers in the state are expected to be received into the APC fold today in Gusau, the state capital.

APC caretaker chair and Yobe State Governor Mai Mala Buni, will lead the team to receive Matawalle. He will be supported by other PAC governors.

Matawalle lost the 2019 election to APC candidate Muktar Idris but was sworn in after the Supreme Court ruled that the APC ran foul of its Constitution in picking its standard bearer.

The situation affected many House of Assembly members elected on the APC platform, who also los their seats to the PDP opponents.

Matawalle is the second PDP governor to defect to the APC this year.

His words: â€œA combined reading of Section 221 of the 1999 Constitution as the pronouncements of the Supreme Court in Faleke v. INEC (2016) is clear in holding that it is the political party that stands for election, that votes scored in election belong to the political party and that the candidate nominated to contest at an election by his party acts only as the agent of his party.

â€œThe PDP hopes that Bello Matawalle as well as members of the National and State Assembly from Zamfara State will take caution.â€

Former Governor Abdulaziz Yari, who is the APC leader in Zamfara State, said members were set to receive Matawalle.

Yari, told reporters that a meeting of stakeholders of the APC in the 14 Local Government Areas of the state had been convened ahead of the reception ceremony.

The former governor, who was in company with another former governor, Mahmoud Shinkafi, explained that the meeting was to inform them of the development and to see how every member of the party would be treated fairly.

Yari welcomed Matawalleâ€™s decision to join the APC, saying the party members in the state believed that it would benefit the ruling party.

He said: â€œWe hope Matawalleâ€™s coming into APC will be of benefit as well as add value to the party in the state.

â€œWe will not take any position without our peopleâ€™s consent, and that is why we invited all the stakeholders to take a stand. We will not decide on anything that will not be of benefit to the party as well as the state.

â€œAs a party, we need as many people as possible to make us bigger. We called the meeting to inform our people of our decision to accept the governor in our party.

â€œWe are welcoming him because it shows that we are doing the right thing and APC is well built in Zamfara State. We hope it would come with a success for the party in future elections.â€