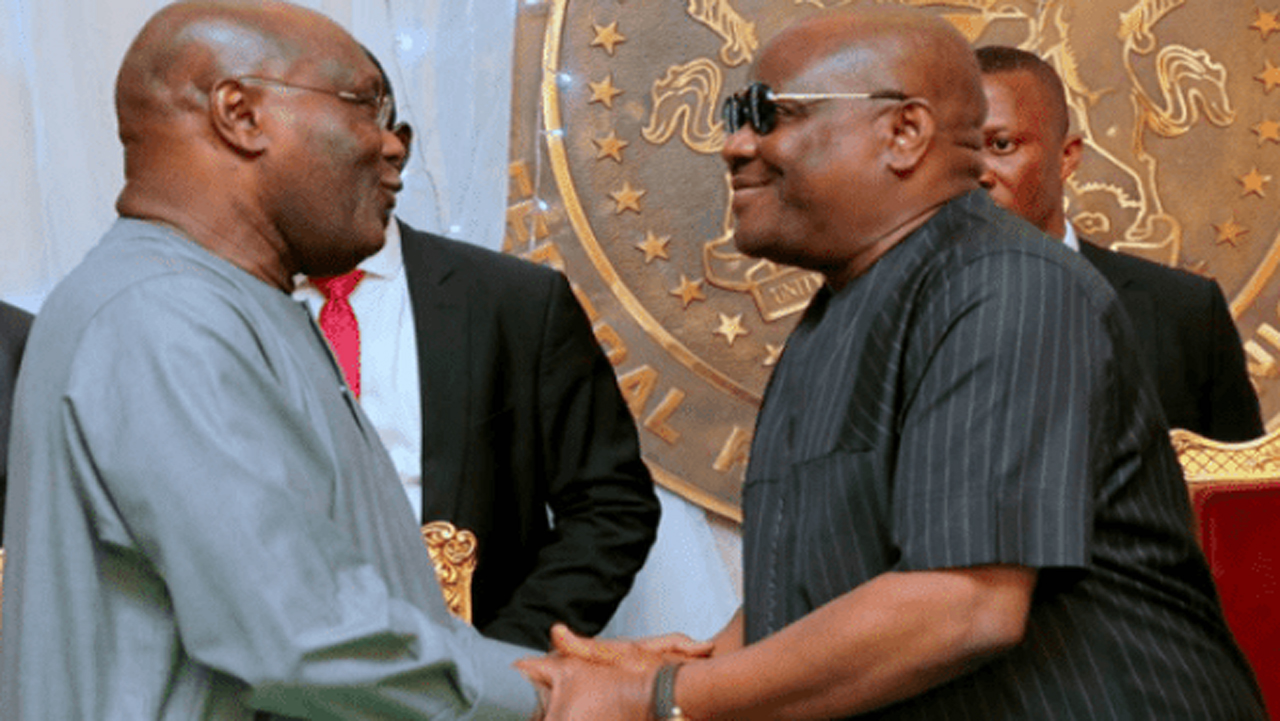 The presidential candidate of the People’s Democratic Party, Atiku Abubakar has promised to support the presidential bid of Nyesom Wike, Governor of Rivers State in 2027 if the governor sheaths his sword and support him (Atiku) in the 2023 general elections.

Atiku made the promise in an obviously desperate bid when he met with Wike in Abuja on Thursday in an attempt to patch up their differences, The Nation reports.

SaharaReporters earlier in the week had reported that Atiku met with some South-East stakeholders in Enugu State where he promised to hand over to the Igbo in 2027 if the region supported him to become the president in 2023.
Both Atiku and Wike’s supporters have been locked in a face-off since June when the former vice president overlooked Wike and picked Delta State Governor Ifeanyi Okowa as his running mate.

Previous efforts to reconcile them had failed to yield any positive result.

Atiku even appeared to have decided to ignore Wike, and proceeded with his campaign while the Rivers State Governor and his supporters threatened to have nothing to do with the Atiku presidential campaign.

Five of the 11 state governors elected on the platform of PDP are in Wike’s camp, leading to a major crack in the party.

However, a fresh effort brought them together on Thursday where Atiku pleaded with Wike to prevail on his camp to join the campaign train of PDP.

Sources close to the meeting said the PDP presidential candidate offered to back Wike for the presidency in 2027.
Wike was non-committal to Atiku because of past breaches of commitment, it was gathered.

According to investigation, Atiku met with Wike behind closed doors at the governor’s personal residence in Asokoro District in Abuja.

A source, who was privy to what transpired, said: “Again, Atiku extended the olive branch to Wike. He pleaded with the governor to look at the bigger picture of winning the 2023 poll.

“He asked Wike to prevail on his group to join the PDP campaign train.

“Atiku promised to be fair to all PDP members despite the differences of the past few weeks which were caused by the outcome of the party’s presidential primaries.”
Another highly-placed source said Atiku offered to “support Wike in 2027 if he gives necessary support to him in the ongoing campaign.

“Wike was not forthcoming and he avoided an outright commitment to Atiku’s request to be part of the PDP campaign team.

“He told Atiku that he would go and consult with his team and get back to him. So, he has kept Atiku in suspense again. We don’t know what the governor and his strategists will say.”
A source in Wike’s camp said, “The governor wasn’t excited about the 2027 poll prospect because he made the Igbo a similar offer in Enugu a few days ago.

“The major challenge which Wike felt Atiku did not address was trust deficit. Our camp is of the opinion that Atiku doesn’t walk the talk on any agreement or issue because of pressure here and there.
“This crisis would not have reached this level if Atiku had kept faith with London talks and unwritten agreement with Wike. Our group will soon meet on the latest overtures from Atiku.”

EPL: Why we lost 3-1 to Arsenal – Conte reveals