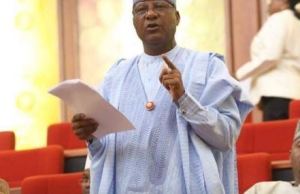 The Editor Nigeria reports that Senator Ibrahim Abdullahi Danbaba on Thursday emerged the new Deputy Minority Whip of the Senate.

Senate President Ahmad Lawan read a letter appointing Danbaba to the position on the floor of the Senate.

The letter was signed by the National Secretary of the Peoples Democratic Party (PDP), Ibrahim Tsuari.

The position became vacant following the defection of the former Deputy Minority Whip, Senator Sahabi Yaâ€™u (Zamfara North) from the PDP to the All Progressives Congress (APC).