Operations of Arik Air on Thursday shut down by the National Union of Air Transport Employees over non- payment of workers salaries and poor working conditions.

The workers blocked the entrance of the airlineâ€™s headquarters, carrying placards with different inscriptions.

They alleged that several members of staff had been furloughed, adding that pensions were being owed. 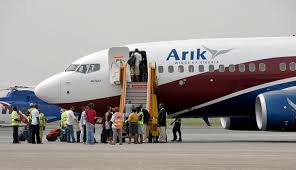 State Secretary of NUATE, Ijeh Anthony, explained that the issue had lingered for long, vowing to continue the strike till all demands are met.

He said, â€œThe contentious issue is the signing of the Conditions of Service which we have been negotiating for the past three years.

â€œBut the only aspect remaining in the CoS is the issue of the severance package. We have sought interventions from the Ministry of Aviation, the Nigerian Civil Aviation Authority.

â€œHowever in most discussions, Arik Air Management will always renege.â€

At the MM2 terminal, several passengers booked for 8 am flights were stranded.

Some of the passengers, who spoke with our correspondent, were distraught after waiting for several hours.

Officials from the airline were seen trying to manage the situation.