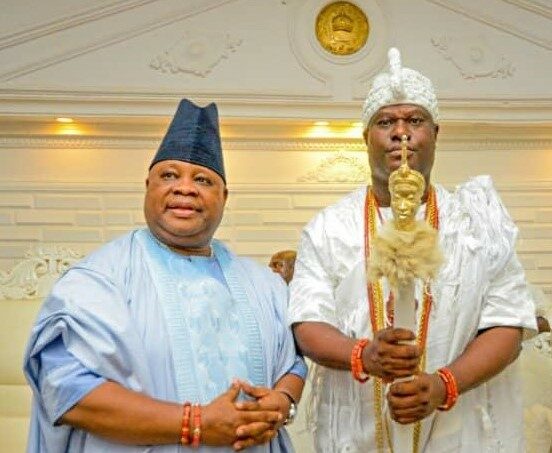 The Ooni of Ife, Oba Adeyeye Ogunwusi, on Monday extolled the virtue of humility of Senator Ademola Adeleke, charging him to further embrace both his friends and detractors.

Oba Ogunwusi spoke in his palace when Adeleke, who is the flagbearer of the People’s Democratic Party in the July 16 Osun governorship poll, paid him a courtesy visit.

The royal father, who acknowledged the respect Adeleke always showed to him, prayed for peace and security during the governorship election.

He said, “Not everyone will like you. Always put your ways in the hands of God and continue to pray for success. All powers belong to God. Embrace all, both friends and those that don’t like you. May God continue to guide you in all you do.”

Speaking earlier, Senator Adeleke, who promised to pay attention to infrastructural development, also declared that if elected, there would not be capital flight, as resources of the state would be used for developmental purposes.

Race For Running Mate: Tinubu’s Camp Narrows Down On Shettima…