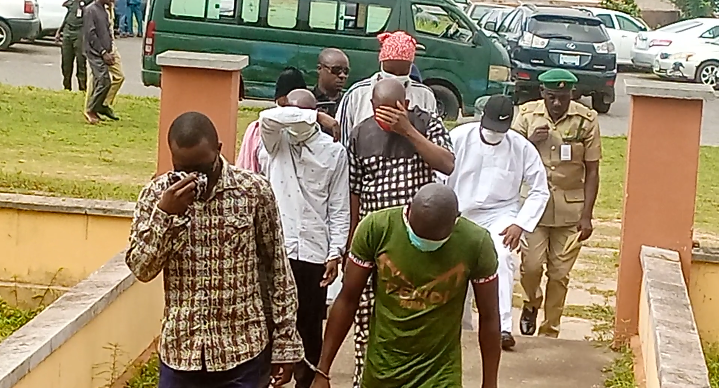 At the Osun State High Court (1), Osogbo, Osun State, on Monday, May 30th, 2022, the receptionist who lodged Timothy Adegoke, a postgraduate student of Obafemi Awolowo University (OAU) who was allegedly murdered at the Hilton Hotel on November 6, 2021, says Adedoyin, son were at the hotel the night Adegoke lodged

“On the 5th of November 2021, By 12 noon, I resumed duty, at Hilton Hotel Honours Ile-ife Osun State. Around 12noon that I resumed duty, as a receptionist, the Manager on Duty with me was Oyetunde Kazeem.
I was at the reception till 5:30pm I had no guest.

“Around few minutes to 6pm, a man entered the reception he said he want to Lodge. I gave the man the price for the rooms in the hotel. The man said he needs the Suite which is N18,500 for a day. I called the Manager on duty Oyetunde Kazeem to come to the reception that we have a Guest for the day.
The man said he want to lodge for two nights so he has to check the rooms to make his choice. Mr Oyetunde Kazeem took him to check the rooms and he requested for Room 305. I handed over Room 305 key to him.

The man said he does not have cash that he want to make transfer for the payment of the room. I advised him to make payment to my UBA account because we needed money to sought out expenses in the Hotel.

The man made the transfer of N37,000 into my account. I issued a receipt of the money and gave him the duplicate of the receipt because the original will be stapled into the Lodger’s book of the Hotel. I gave the Manager my ATM Card to withdraw money to buy diesel.
I had other guests for the day which I sold 15 rooms”. Adesola explained.

The Manager on duty with her on the 6th of November 2021 was Adeniyi Aderogba. Adeniyi told me to transfer the 20,800 naira into his account because they have to meet up their expenses for the day which I did.
Then I left the hotel and closed for the day” Adesola narrated.

“On the 7th Of November 2021, I resumed duty by 12noon at the other branch of the hotel which is Hilton Hotel Royal as a receptionist as expected.

“On the 8th November which was on Monday 2021, around 9am, I went to Stanbic IBTC Bank at iIe Ife Osun State to make deposit for the room sold at Hilton Hotel Honours.

“I made N103,000 into Hilton Hotel account.
I went to Wema Bank to make the deposit of the sales made on the 7th of November 2021 for Hilton Hotel Royal’s. After making the payment, I left the bank. It was past 12noon and I went back to Hilton Hotel Royal and I met Madgalene Chiefuna who will be on duty for the day.

I told her that I have made the deposit for both Hilton Hotel Honours and Royal then I stapled the evidence of payment which I made at Hilton Hotel Royals to the account Lodgement book.
I told Madgalene that I will not be able to go to Hilton Hotel Honours to Staple, then she suggested that since am going to be on duty the next day which is 9th of November 2021, I agreed and left the Hotel because it is my off duty.

“On the 9th of November 2021, early in the morning one of the receptionists, Quadri Moshood, called me on phone that the auditor Adebayo Kunle is asking for the Lodger’s account for the previous week. And he needs the evidence of payment which is the teller for the previous week that is with me has not been stapled.

When I got to Hilton Hotel and Honours Ile-ife, on the 9th of November 2021, I met Quadri Moshood, he collected the teller and stapled it in the Lodger’s account.

He gave me the account and directed me to the Auditor’s Office
When I got to the Auditor’s office, at the Polythenic Ile-ife, he asked why the account is coming late and I explained the reason to him that I made the deposit the previous day and I was not chanced to go back to Hilton Hotel Honours because I have to get something to be done at home because am preparing for my brother’s wedding that weekend at Lagos.

“On the 10th November 2021, I travelled to Ilesa Osun State till 11th of November 2021.
Around 7am, 11th of November 2021 Receptionist Esther Asigo called me on phone and told me there was a meeting at Chairman’s house which is at Parakin Ile-ife.
I told Esther that I will not be able to meet up with the meeting because am not in ile ife. She said she Will tell them that am not around.

Around 8.30am that same day, Receptionist Quadri Moshood called to inform me about the meeting and I told him Esther called me that I will not be present at the meeting
Moshood said I have to be present that it is important and I asked him why is the meeting important for me to be present and he said a receipt was missing in the account I prepared for the 5th of November 2021.

“I told him a Receipt cannot be missing in my account because I prepared the account very well and by myself. But he still insist that I need to be at the meeting.

“When I got there, I met Quadri Moshood inside the compound. He asked me how can missing receipt be in my account and I told him that I don’t know anything about the missing receipt.

“I asked him what’s the relationship between the missing receipt and Policemen. I asked him that, is Dr Rahman Adedoyin investigating any fraud but he said all he knows is a missing receipt. He said he will assist me to fill another clean hotel receipt to fill and sign.
He gave me a name to write on it which I can’t remember.

He said the Chairman needs my attention inside the sitting room. He said he heard that someone transfered N37,000 to my account and I said yes that that the person is my guest and he said a receipt is missing that the police officer are investigating on the missing receipt. I told him I don’t know what he is talking about.

“Dr Rahman said I should just tell the police that the person did not sleep in the hotel, then I asked him that what of if the police officer found out that N37,000 was made into my account.
Prince Adedoyin now asked me that do I have money inside my account and I said no and he, Chairman said if he had known, he will have transferred money into my account that police officer are now at Hilton hotel Honours that he can’t make the transfer again.

Dr Rahman recieved a call that Police officer are waiting for me at Hilton Hotel Honours to meet the police.
The Police Officer asked me that someone transfered N37,000 and I said yes that the person was a guest that lodged in on the 5th of November and paid for two nights and the Officer said I should follow them to State CID, Osogbo.
When we got there, the Inspector asked me that where is the guest I said logdged on the 5th that paid N37,000 into my account.

“I told the Inspector that I don’t know that the guest paid for two nights which is for 5th and 6th of November 2021 is expected to check out on the 7th by 12noon, that I resumed back to the hotel on the 9th and I don’t know where the guest is.

I was asked that how many people prepare account for guest on Lodger’s and I said only the receptionist
The police then gave me the Lodger account which I checked and noticed that there were 15 rooms which I remembered vividly that I sold 16 rooms, I further checked the account that the handwriting was not mine.
I checked the back of the account and the signature is not mine.

I told the officer that the Lodger’s account he showed to me was not prepared by me.

I told him am surprised about the account he is showing to me because it was not prepared by me.

I told the Inspector that on the 11th, that a receipt was given to me which has 7316 by Prince Raheem Adedoyin that I should present it to the officers.

Afterwards, I was lll.

On the 12th November 2021 Inspector Afeez came to meet me inside the cell that we have to go to Ile -ife.

“Inspector Afeez and I went to Dr Ragman’s office inside one of his schools and Inspector told him that he want to see the other defendant. They arrested all of them and we were all taken to State Cid Osogbo
When we got to State CID Osogbo, Inspector Afeez asked them to make their statements.

During the course of making their statements, I heard Adeniyi Aderogba and Inspector Afeez voice which Adeniyi Aderogba said that they met the guest who lodged on the 5th of November 2021 dead in his room which is room 305″

This was just as Justice Adepele Ojo, after the defence team had closed its case, adjourned the matter till Monday, June 27, to adopt final written addresses.