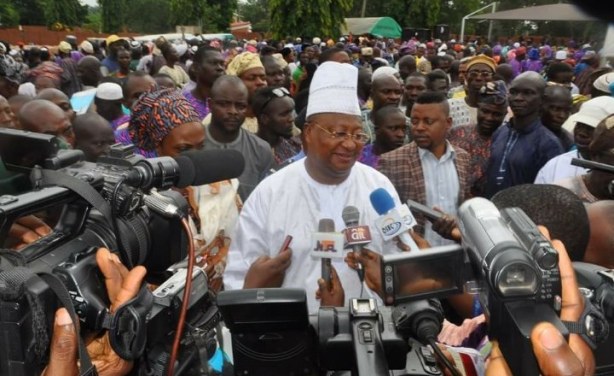 Alfred Aderibigbe, the nurse who treated late Senator Isiaka Adeleke before his death on April 23, 2017, has been discharged and acquitted by an Osun State Court.
An Osun State High Court sitting in Osogbo on Thursday, set the nurse free.

Then governor, Rauf Aregbesola had set up a coroner inquest to look into the cause of the death of Senator Adeleke.
The panelâ€™s findings showed that Adeleke died of drug overdose coupled with an aspiration of gastric content.

The coroner inquest was headed by Magistrate Olusegun Ayilara, who revealed said the deceased had an administration of an overdose of sedative and analgesia by unqualified personnel, Alfred Aderibigbe, through intravenous means, which action was hastened by the presence of alcohol in the system.

Senator Adeleke had patronised the Aderibigbe for over 20 years, taking treatment from him without a doctorâ€™s prescriptions.
Ayilara indicted Aderibigbe as unqualified personnel and recommended that the Department of Public Prosecutions should duplicate the case file and press approbation charges against him.

Aderibigbe was arraigned in the High Court on 8th June 2018 and he pleaded not guilty to one count murder charge preferred against him.

Aderibigbe, during his trial, alsoÂ gave evidence before the Court, saying the drugs he gave Adeleke were those given to him by the former lawmaker and not in overdose.

The prosecuting team from the Ministry of Justice led by Acting Solicitor General and Permanent Secretary, Mr Dapo Adeniji, had called nine witnesses and tendered several exhibits during the trial.

Among the witnesses is Chief Medical Director of Ladoke Akintola University Teaching Hospital, Osogbo, Prof. Akeem Lasisi, the Consultant Pathologist, who carried out the autopsy on Adelekeâ€™s corpse, Dr Taiwo Sholaja, a police forensic expert and others.

The defense counsel, Mr Soji Oyetayo, had told the presiding judge to discountenance the submission of the prosecution counsel in regard as misconceived and lacking in evidence as the prosecution failed to prove to the court that the defendant acted without doctorâ€™s prescription.

Oyetayo commended the judgement of the presiding judge saying that justice had taken its course.

Lai Muhammed: “Suicide bombing, attacks has become a thing of the past.”