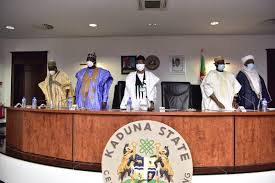 The Northern States Governors’ Forum on Monday opposed the call by its Southern counterpart that the Presidency should move to the South in 2023.

The northern governors, who stated this at their meeting in Kaduna, said the call by the Southern Governors’ Forum was against the constitution of the country.

But groups including the Ohanaeze Ndigbo, the Pan-Niger Delta Forum, Afenifere and the Delta State Government said the northern governors’ position was against the unity of the country.

The southern governors at their recent meeting in Enugu reiterated their demand that the Presidency should shift to the South in 2023.

On Monday, the northern governors said although some of them had endorsed the Southern governors’ call for power shift to the South, the regional governors collectively condemned such a call.

They said the statement by their Southern counterparts contradicted the provision of the Constitution of the Federal Republic of Nigeria 1999 as amended.

They added that the elected President must meet the requirements which include getting “the majority votes, scoring at least 25 per cent of the votes cast in two thirds of the states of the federation; in case of a runoff, a simple majority win.”

These were contained in a communiqué issued after an emergency meeting of the regional governors and the chairmen of Northern Council of Chiefs held in Kaduna on Monday.

The Chairman of the Forum and Governor of Plateau State, Simon Lalong, who read out the communiqué on behalf of his colleagues, also said the issue of the collection of Value added Tax by states was before the court.

He said it would amount to subjuduice to take a decision on the matter.

Lalong insisted that it was the view of his colleagues that until there is pronouncement by the Supreme Court on the substantive matter between Rivers and the Federal Inland Revenue Service, “the matter is subjudice and Northern States Governors’ Forum would respect this.”

The 11-point-communique read, “The forum observed that some northern governors had earlier expressed views for a power-shift to three geopolitical zones in the South with a view to promoting unity and peace in the nation.

“Notwithstanding their comments, the forum unanimously condemns the statement by the Southern Governors’ Forum that the Presidency must go to the South.

“The statement is quite contradictory to the provision of the Constitution of the Federal Republic of Nigeria (1999) as amended that the elected President shall score the majority votes; score at least 25 per cent of the votes cast in two thirds of states of the federation. In the case of a runoff, a simple majority win.

“The Northern State Governors’ Forum considered the ongoing national debate on the collection of Value Added Tax. As responsible leaders while we are constraint by the fact that the matter is sub-judice, we however for the purposes of educating the public make the following observations:

“Rivers and Lagos state governments have enacted their own VAT laws and the Southern Governors’ Forum has expressed support for this course of action;

“VAT is being confused by these state governments as a sales tax. If every state enacts its own VAT law, multiple taxation will result in increase in prices of goods and services and collapse in interstate trade. VAT is not a production tax like excise, but terminal tax which is paid by the ultimate consumer;

“Another confusion is ignoring observation above and its “overall effect”. The reason Lagos accounts for our 50 per cent VAT collection is because most of the telecommunication companies, banks, manufacturing and other trading activities have their headquarters in Lagos with the resultant and wrongful attribution of VAT

“Until and unless the Supreme Court pronounces judgment on the substantive matter between Rivers State and Federal Government, the matter is sub-judice and Northern Governors’ Forum would respect this.

The governors also lauded the current onslaught by the military on bandits and insurgents in the some part of the north.

Besides, the forum decried the high level of conspiracies being perpetrated by some judicial officers in releasing and granting bail to arrested criminals. “This attitude sabotages the fight against criminality, therefore, there the need to develop good and robust intelligence mechanism amongst States was identified as a panacea,” Lalong added.

Meanwhile, stakeholders in the South, including have taken on northern governors over opposition to power shift to the South.

On its part, the Delta State Government said it aligned with the decision of Southern Governors’ Forum.

The state Commissioner for Information, Mr Charles Aniagwu, who stated this in an interview with The PUNCH on Monday in Asaba, said, “The Delta State Government has already aligned with the decision of southern governors, so it does not matter whether the northern governors are opposing it. We were there when the decision was taken and that is final as far as Delta is concerned”

When contacted, his Ondo State counterpart, Mr Donald Ojogo, said, “They (northern governors) have expressed and indeed exercised their rights under the freedom of expression. No one can stop them from expressing themselves.”

But the apex Igbo socio-cultural organization, Ohanaeze Ndigbo, described the position of the northern governors as unfortunate.

It said the North benefited from the Nigerian union more than it contributed to it.

Spokesman for the Igbo apex body, Chief Alex Ogbonnia, who spoke to one of our correspondents on the telephone, warned the northern leaders to have a rethink if they wanted the Nigerian union to continue.

Ogbonnia said, “If there is any group of people that benefits from the corporate existence of Nigeria, it is the North. This is because what northerners bring to the table is far less than what they take from the table. So instead of looking for a way for Nigeria to remain united, develop and grow, they are looking at the way Nigeria will break up. It is simply inconceivable that the North that benefits the most from this country would like the country to break up.

“I have often said that if they are talking of constitutionality, as a matter of fact there is no place it is written in the constitution, but there is a gentleman agreement about power rotation between the north and south.

“The resolution was reached at the NUC (National Universities Commission) Event Centre at Abuja, and that was when Abdulsalami Abubakar was the Head of State and Commander in-Chief. It was agreed that power would shift from North to the South and that was why all the parties concentrated on the South and it was zoned to the South-West in 1999.

After Obasanjo it went to Yar’Adua from North, to Jonathan from South and returned to North, Buhari. So now after Buhari, it is supposed to come down South. That is gentleman agreement. It is unconscionable for the North to begin to talk about the power remaining in the North now.

PANDEF described northern governors’ opposition for power shift to the South as most ridiculous, cowardly and irresponsible.

The National Publicity Secretary of the group, Ken Robinson stated this during a telephone chat with one of our correspondents on Monday.

Robinson said the attitude of the northern governors to the southern Presidency when they enjoyed massive support from the South for the President, Major General Muhammadu Buhari (retd.) to come to power was insensitive.

He stated, “The decision of the northern governors is most ridiculous and insensitive. It exposes them as hypocrites and cowards. That is what they are and they should be told clearly. Their decision is ridiculous.

“There is no sane person, nobody in his sane mind that should say power should not rotate after eight years of a northern presidency.

“Anybody, no matter how highly or lowly placed that says that there should be no power rotation in 2023 does not love Nigeria. He is one of those that does not want Nigeria to progress and to be united and does not want peace in Nigeria.

“Let it be known to the Northern governors and indeed the Northern community that there can be no peace without justice, and saying that there should be no power rotation is an act of injustice against southern Nigeria.

“After using our money and our votes to become President, they are saying that power will not shift. It is unfortunate, it is ridiculous and it is the most unreasonable, irresponsible statement from any group that exists in Nigeria,” the PANDEF spokesman added.

The National Publicity Secretary of Afenifere, Jare Ajayi, said equity and fairness demand that Presidency should come to the South in 2023.

Speaking in an interview with one of our correspondents on Monday, the group’s spokesman expressed surprise at the position of the governors, saying some northern governors had said before that power should come to the South in 2023

The Afenifere spokesman said, “ This new position by the governors indicated that the issue of forging unity in country is only on their lips and not in their hearts. It is true that zoning is not in the 1999 constitution. So are many other things that are done politically in form of convention.

“For example, it is not in the constitution that in a state with adherents of Muslims and Christians, the governor and his or her deputy should ideally be Christian and Muslim or vis-versa. It is also a matter of convention that two occupants of the said offices should not come from the same local government or senatorial zone.

“These are conventions and not necessarily constitutional matter. Such a convention is entrenched to forge unity and a sense of belonging.

Thus, while we, as Afenifere, concede that a presidential material can come from any part of the country, equity, fairness and justice demand that the next occupant of the exalted office must come from the South since the North would have occupied that office for unbroken eight years by 2023.

“As for a president needing at least 25 per cent of the votes cast in two thirds of the 36 states of the federation, the southern governors never said that the south can win the presidency without votes from the north. They are simply saying that their northern brethren should see the need to let presidential power shift to the South in 2023.”

The Afenifere spokesman asserted that restructuring should take place before the 2023 elections. “If this happens, most of what is causing brouhaha now would be a thing of the past.”