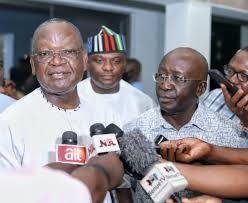 This was confirmed by a former acting National Chairman of the PDP, Alhaji Kawu Baraje, The Editor Nigeria gathered.

Ayu, a former Senate President, who is from the North-Central, emerged the consensus candidate of the PDP ahead of a former Governor Ibrahim Shema of Katsina State and Senator Abdul Ningi from the North-East.

Baraje, had in a statement on Wednesday said the North-Central needed the Presidency not the national chairmanship of the party.

According to him, in the event the zone gets the chairmanship, it should not prevent it from contesting the presidency.

Baraje said, “It was one of the provisos when we settled for Ayu. It (concern) was very much addressed and we are satisfied.

Speaking further he said, “Ayu is capable of leading the party to victory. He has been a Senate President. He has been a minister. He is a founding father of the party. He knows who to contact and know that running a party is about inclusiveness. He is coming on board with all these experiences.”

With the agreement, the presidential ticket of the party is opened to the North and the South.

How Ayu emerged
After the screening and sub-zonal stakeholders’ meetings, three candidates emerged. The North-Central produced Ayu while the North-West nominated Shema. Ningi was the candidate presented by the North-East.

A meeting to select a consensus candidate from the three earlier scheduled for Wednesday, was postponed.

The source, who spoke on condition of anonymity for fear of retribution said, “Yesterday (Wednesday)’s meeting to select consensus candidate could not hold because when the governors saw the mood and number of people mobilised in and out of the venue, they realised their scheme would fail except they appealed to some stakeholders and come clean instead of the manipulations. They then postponed it till 11am (Thursday).

“Another meeting later held last night where Bauchi Governor, Bala Mohammed, and others pleaded with other stakeholders in the zone to accept Ayu because the governors had agreed among themselves that he was the man for the job.

“Mohammed spoke on behalf of his other colleagues. He then ushered in Ayu who also appealed for their support and gave assurances that he will ensure a level playing field for all.”

Another source said,“The scheme by the governors began to unravel at the North-East meeting when Senator Suleiman Nazif who initially stood as the sole aspirant from the zone found out that the Bauchi Governor had encouraged Senator Abdul Ningi to join the race in order to stop him.

“The plan was for them to pick Ningi over Nazif and get Ningi to withdraw for Ayu. When Nazif threatened to contest at the convention no matter what happened and Shema also vowed to go the whole hog, the governors realised that their scheme could fail and they decided to reach out to stakeholders to beg. The governors eventually had their way.”

In his acceptance speech, Ayu promised to return the party to winning ways. He promised to work with other party leaders to rebuild the party in order for it to take power come 2023.

Ayu said, “I believe all Nigerians missed the PDP government. Our 16 years moved the country forward. We intend to work together with all the leaders not only in the north but across the country to reposition this country to the next generation of Nigerians.

“It will be an all-inclusive administration of the party. We will work collectively; we will introduce policies that will be acceptable to Nigerians.”

Also s after the event, Adamawa State Governor, Ahmadu Fintiri said there was no victor or vanquished.

“Distinguished Senator Iyiochia Ayu has emerged as a consensus candidate of the north. With this, we are fully prepared, we are ready,” Fintiri said.

On Thursday, a former Deputy National Chairman of the PDP, Chief Bode George, said it would be wrong to give the North the opportunity to emerge as the presidential candidate after the region had picked a northern chairman.

George further stated that Nigeria had not yet reached the level where zoning would be jettisoned completely.

He said, “Look at the state of the country? I don’t know who formed the membership of our zoning committee and decided. There is no way at least for now that you will have chairmanship from one area and the Presidential candidate from the same area.

“Are we saying we have walked away from the tribal sentiment that has plagued Nigeria for so long? Rather than reducing, it has exacerbated. We must give everybody a sense of belonging.”

The former PDP deputy national chairman said it was untrue that the North had the numbers to win the Presidency better than the South.

He argued that the belief was based on falsehood because there was no date to prove that the North had a larger population than the South..