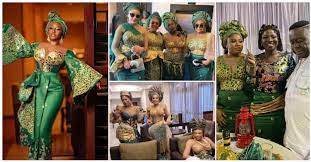 Rita Dominic has sparked online reactions over the amount she sold her traditional wedding Asoebi.

The traditional wedding of Rita Dominic to her lover Fidelis Anosike has remained a topic of discussion online after many of her colleagues stormed the event.

Rita Dominic’s colleagues painted Imo State green as they were all seen stunning in their different styles and outfits.

However, an Instagram blogger Cutie Julls has alleged that Rita Dominic’s Asoebi cost one hundred and fifty thousand Naira.

While some netizens expressed surprise at the amount, calculating how much one would have spent at the event, others claim it’s good to be financially buoyant.

jbjaunty wrote: It’s good to have money. 150 for only asoebi, you never sew oo. Hair, makeup, flight money and hotel. Omo God give me and my friends money oo

Kemi Filani News recalls the outfits of the Nollywood stars at Rita Dominic’s traditional wedding got many people talking online.

It has been observed there was no breast pushed up to the jaw outfit at Rita Dominic’s wedding among all the celebrities at the event.

The dress styles where the breast is always revealing in outfits among many guests at weddings and other occasions has been a recent trend.

However, it was surprising that no guest had such style at the event, which took place in Imo State, considering it was a Nollywood event.

Many Nigerians reacted to it, saying that Rita Dominic might have probably given a dress code and wanted everything to be classy at her event.

Annie Idibia exposes what Rita Dominic did to her years ago…