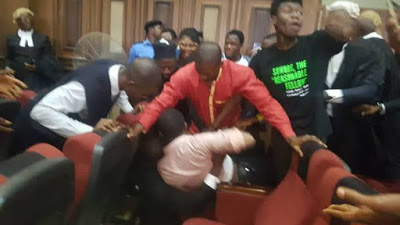 Nigerians have taken to social media to condemn the re-arrest of Omoyele Sowore today by the operatives of the Department of State Services, DSS,  less than 24 hours after he was released.

The officials of DSS reportedly stormed the courtroom, causing pandemonium at the court and physically assaulting Mr Sowore, forcing the judge, Justice Ijeoma Ojukwu to take cover in the courtroom.

Ojukwu had earlier ordered the SSS to release Sowore within 24 hours and also pay him N100,000 for improper legal conduct. The SSS then released Mr Sowore only for him and his co-defendant to be violently re-arrested.


Reacting to the incident, many Nigerians took to their social media platforms to lambast the Vice President of Nigeria, who is a Professor of Law and a Senior Advocate of Nigeria for allowing such abuse of the judicial process.

Activist and Social Commentator on Nigerian and international affairs, Kayode Ogundamisi in a lengthy message written to President Buhari and Vice President Osinbajo said the DSS act is an embarrassment to those who support the government but ultimately a display of misuse of power and lawlessness.

He said, “Dear President Buhari and Vice President Osinbajo. Invading the court premises to re-arrest Sowore will go down as one of the low points of this government, it is an embarrassment to those of us who support the government but ultimately a display of misuse of power and lawlessness, to the few sane people in government, it is your duty to protest from within. It’s either you have 5th columnist within the government or the government itself care less about the rule of law. #FreeSowore and others now.”

@BhadmusAkeem said “Yele Sowore rearrested by The DSS. Muhammadu Buhari & Yemi Osinbajo rode on the Anti Corruption & Regard for Rule of Law platform to campaign & win 2015 election. I never knew a day like this will come! 2023 is not that far sha! I hope Nigerians will come together & act right”

@SamuelOgundipe said “When SSS attempted to break into the National Assembly, Acting President Osinbajo fired its director-general within a few hours. Today, SSS actually broke into a federal courtroom with guns, traumatising judges and citizens. Sowore’s case has finally boxed President Buhari in.”

@tonymourinho said “With the way Buhari and Osinbajo are running this country, Just look at the Sowore incident today, you will know it’s just a matter of time. I fear if we will get to 2023 as Nigeria. #ThingsFallApart Falana”

@smartemuobor said “If i were Osinbajo i will resign, especially when my constituent which I am supposed to be a Professor of is being desecrated by my superior daily. According to @Mazigburugburu1 “If you think that there is still a country, your mumu is anointed.”#Osinbajo #Sowore”

@prayziz said “Lol Keyamo, Sagay and Osinbajo are clowns sha. I hope people never forget the roles they played in legitimizing this nonsense.”

@Alvinuzor said “The lowest of the tyrant Buhari is not with the Vice President, Osinbajo issue but The DSS official holding Sowore down in Court after interrupting court proceedings #ThingsFallApart indeed, the center can not longer hold. No Democracy, no Rule of law and the Judiciary is messy.”

@MrOdanz said “If Osinbajo dares say anything about DSS that he is not authorized to say, he will stop receiving his Monthly salary/allowance. Are Nigerians ready to pay him his wages? What are the extents of Osinbajo’s powers pls? What can he do? He is not Atiku who was a renowned Politician before being VP. He has no money. He has no powerful family name. He is just Tinubu’s “lieutenant” in Aso Rock. What can he do biko?”

@FeralJack_ said “Osibanjo cannot resign, the least he can do right now is stand up to the DSS on how they’ve defiled the court of law. Condemn their actions! Stand alone. I actually feel Osibanjo doesn’t know the extent of his powers or he does but someone somewhere is telling him to behave because of the grand plan

@Morris_Monye said “NBA is dead! I am hearing that they are even hosting Osinbajo in a few weeks.”

@OyindaSalaudeen said “We are really going to allow Falana to be the only one speaking on behalf of the legal profession in Nigeria. NBA is doing what ? 🙃

@YoungOtutu said “Sadly, amidst the lawlessness: The Vice president, Osinbajo they say is a Prof of law. The President, Buhari they say is a reformed democrat. The Judiciary they say is equal to the executive. Nigeria they say is a democratic nation.”

@MrOdanz said “Buhari holds the keys to DSS jail, he decides who goes in and out. He has Ahmad Lawal by his balls, the courts are under his feet, Osinbajo is on his knees because he has no balls. Nigeria is being held hostage by a dictator in turtleneck Kaftan.”

@nigeriasbest said “Hope….Tinubu, Fayemi, Fashola, Osinbajo are all silent because they hope Buhari will handover to them. Elrufai is silent because he hopes to inherit the type of tyrannical power that Buhari possesses. At the end of the day, things could end in a flash just like Abacha…”

@JiboyeToluwani said “You have disappointed your generation and the coming one. I am a nobody yet and I know you all won’t send anyone to arrest me, but one day I would stand out tall and say it to the world that you failed.”

@OluniyiGates said “Unpopular opinion: Osinbajo is helpless too and if he resigns, they’ll just replace him with someone worse. From his own personal precedent when he was in control and sacked the DSS DG when the DSS invaded the NASS, you can tell he doesn’t support his principal’s actions.”

@UnclePamilerin said “Biko is Osinbajo the new DSS DG because of all this insult, I’m not understanding. Have you forgotten we still have a President, and Osinbajo cannot do anything without the President Approval?

@Solar_unique said “The way some of you always drop the name of VP Osinbajo anytime issues like this come up explains your ignorance. You people don’t know the limit of the office of the VP in Nigeria? Have you forgotten how he sacked the DG of DSS when he was acting President? Kai.”

@Olumuyiwa__ said “If Osinbajo attends the NBA dinner next week and is not disgraced, then there is something wrong with all of us.”

@JajaPhD said “Even Osinbajo isn’t safe. Does he realise that?

@YoungOtutu said “The DSS acting lawlessly because Buhari doesn’t want to interfere. Sowore supported Buhari against Jonathan. Karma is a bitch. Buhari is not aware of Sowore’s case. DSS is to be blamed not Buhari. Osinbajo is only an assistant___All of you are mad”

@amazon_CJ said “We didn’t expect him to go and be cowed into a corner. This is a freaking Democracy. If pastor Osinbajo (SAN) feels this govt is against his principles, Resign! Let pipo no ur stand. So far as he’s a part of this tyranny, he isn’t any better dan any of one of them.”