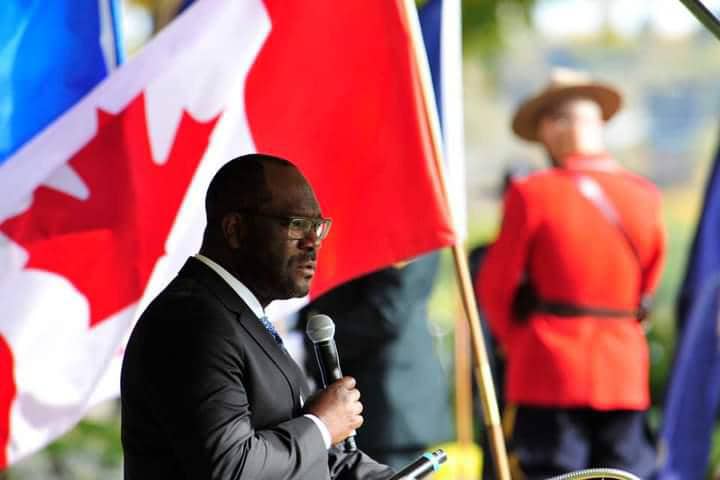 Nigerian-born Minister of Justice and Solicitor-General of the Government of Alberta, Canada, Kelechi Madu, has been asked to step aside over traffic-related offences.

The Premier of Alberta, Jason Kenney, announced this in a series of posts on his verified Twitter account on Tuesday.

According to Kenney, it was important for Madu to step aside pending the outcome of an independent investigation into a March 10, 2021 incident.

Madu, who assumed the role in August 2020, got fined for using his phone while driving in March 2021.

He was accused of calling the province’s police chief after being slammed a $300 fine he received for violating one of Canada’s traffic and safety regulations.

Announcing the decision for Madu to step aside, Kenney wrote, “I have spoken with Minister Madu about the March 10 incident reported in the media today.

“I conveyed to him my profound disappointment in his decision to contact the Edmonton Police Chief after receiving a ticket for a traffic violation.

“Minister Madu told me that he did not ask to have the ticket rescinded, nor was it his intention to interfere in the case, and that he promptly paid the ticket.

“I understand that Chief McFee has confirmed that at no time did the Minister seek to have the ticket rescinded.

“Nevertheless, it’s essential the independent administration of justice is maintained.

“That’s why I will appoint a respected independent investigator to review the relevant facts and to determine whether there was interference in the administration of justice in this case.

“In the interim period, I have asked Minister Madu to step back from his ministerial duties.

“Details about the independent review will be made public in the near future.”

The Premier also said Minister Sonya Savage would act as Minister of Justice and Solicitor General during Madu’s leave of absence.

This online medium had earlier reported that Madu, in July 2021, slammed the Nigerian Minister of Justice and Attorney-General of the Federation, Abubakar Malami, over the re-arrest of the leader of the proscribed Indigenous People of Biafra, Nnamdi Kanu.

“The Attorney-General of Nigeria, Abubakar Malami, is a disgrace to the rule of law and not worthy to be an officer of the court. He has shown himself to be a bigot, who does not understand what it means to live in a pluralistic society governed by the dictates of the rule of law,” Madu had posted on his Linkedin page.

Malami had fired back and described the views of Madu regarding the re-arrest of Kanu as an “outrageously ignoramus opinion that is eccentric and weird”.

Kanu is facing terrorism-related charges before Justice Binta Nyako of a Federal High Court in Abuja and the trial has been adjourned to January 19, 2022.