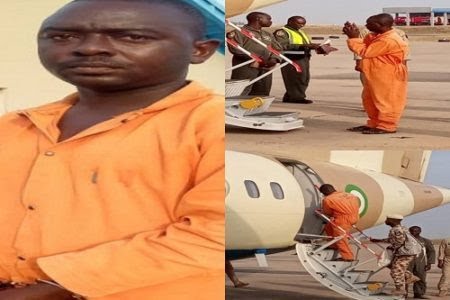 A Nigerian Air Force officer, Sergeant Torsobo Solomon was yesterday reported to have been arrested in connection with the recent August attack on the Nigerian Defence Academy (NDA), Kaduna that left two officers dead.

Reports of communication stated, “On 08 Nov 21, at about 0600hr, NAF07/ 23922, SGT Torsobo Solomon of 153 BSG (AIRFORCE COMPREHENSIVE SCHOOL YOLA) was arrested on the order of the Base Commander as requested by the NDA Commander for an offence connecting with arms and ammunition with recent bandit attack at NDA Kaduna.

“At about 0815hr, ATR with reg no NAF 930 to arrive flight line to convey him from Yola to NDA KADUNA for further interrogation.

“Below is the suspect onboard the ATR ac to Kaduna.”

However, the NDA in a statement on Monday night said he was not in their custody.

*RE: ARREST OF SERGEANT TORSABO SOLOMON*

This is to inform the general public that the above named person is not in the Nigerian Defence Academy’s custody as alleged and has no connection with the Academy. The Nigerian Defence Academy is a Military Training Institution and not an Investigative Security Agency. The general public is hereby advised to disregard this misinformation and refer to relevant Investigative Security Agencies for clarification.