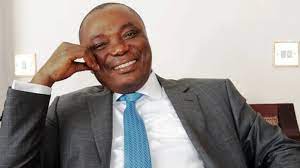 The Economic and Financial Crimes Commission says it will challenge the victory of Delta North Senator, Peter Nwaoboshi, who was recently discharged and acquitted of alleged fraud to the tune of N322m on June 18, 2020. The Editor reports.

The spokesman for the EFCC, Mr Wilson Uwujaren, said this during an interview with Saturday PUNCH on Friday.

â€œWe will be taking Senator Nwaoboshiâ€™s case before the Court of Appeal,â€ Uwujaren said during a brief telephone interview with one of our correspondents.

This comes just as the President, Major General Muhammadu Buhari (retd), personally welcomed Nwaoboshi to the ruling All Progressives Congress.

Besides, the Niger Delta Development Commission had last year accused Nwaoboshi of using 11 companies as fronts to secure a N3.6bn contract from the NDDC and failing to execute the contract, an allegation which the senator has denied.

In 2018, Nwaoboshi was arraigned by the EFCC before a Federal High Court in Lagos for N322m fraud involving two of his companies.

Nwaoboshi and the two companies â€“ Golden Touch Construction Project Limited and Suiming Electrical Ltd â€“ were arraigned for acquiring a property, Guinea House, on Marine Road, Apapa, Lagos for N805m. The EFCC alleged that N322m out of the N805m was part of the proceeds of fraud.

However, Justice Chukwujekwu Aneke said the EFCC relied on hearsay as evidence.

One week after his acquittal, the lawmaker, who is a former state chairman of the PDP, was welcomed by the President, according to a statement by the Senior Special Assistant to the President on Media and Publicity, Garba Shehu.

The statement read in part, â€œPresident Muhammadu Buhari on Friday in Abuja welcomed Senator Peter Nwaoboshi to the APC after he left the Peoples Democratic Party, saying â€˜you are welcome to the progressivesâ€™ family.â€™

â€œThe Deputy Senate President said Senator Nwaoboshiâ€™s decision to join the APC clearly shows that the effort of the CECPC was yielding fruit. The senator was warmly welcomed by party members.â€

Why Nwaoboshi defected to APC â€“Investigation

Meanwhile, an investigation by Saturday PUNCH revealed that Nwaoboshi dumped the PDP for the APC to perfect his ambition of running for the deputy governor of Delta State in 2023.

Nwaoboshi announced his defection when he met with President Buhari at Aso Villa on Friday.

The lawmaker was said to have been accompanied on the visit by Omo-Agege, who hails from Delta Central and is said to be eyeing the governorship seat.

Nwaoboshiâ€™s defection is coming two days after the state PDP suspended him from the party for one month over anti-party activities.

According to the PDP, the action became necessary against the backdrop of the recent â€œromance with an opposition party, APC, verbal recklessness and unprovoked utterances of Nwaoboshi which the state PDP Working Committee views strongly as totally unacceptable and disturbing.â€

The lawmaker was also said to have been embroiled in verbal attacks against Governor Ifeanyi Okowa, whom he succeeded at the Senate in 2015.

Meanwhile, Okowa on Thursday replied to the lawmaker, who he described as â€œa strangerâ€. The governor said Nwaoboshi should not be pitching him with his predecessors.

Reacting to his defection, the PDP in Delta State dismissed the claims that Nwaoboshi defected as he had already been suspended.

The party, in a statement signed by its state Publicity Secretary, Dr Ifeanyi Osuoza, said, â€œWe wish to state for the avoidance of doubt that Senator Peter Nwaoboshi had already been duly suspended by the state Working Committee of our party following his recent romance with an opposition party, his verbal recklessness, and unprovoked utterances against the person of His Excellency, Dr Ifeanyi Okowa, the Governor of Delta State.

â€œThose unbecoming attitude of the senator exposed him as indecorous and lacking discipline which the PDP cherishes so much. The party had to quickly rise to the occasion by treating him like a mad cow in the china shop and manage his exit through suspension so as to save the soul of the PDP in the State.

â€œHis inevitable exit, therefore, has left a wave of joy in the party as faithful and loyal party members see the move as good riddance to bad rubbish.â€