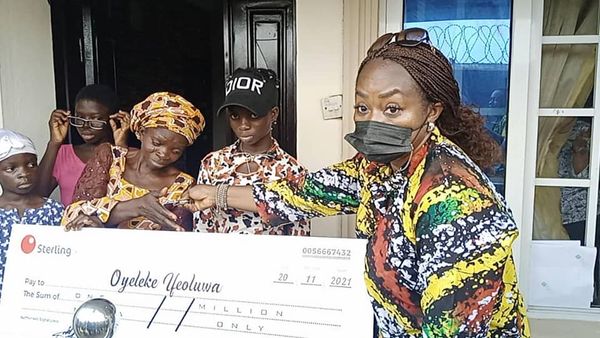 •‘I thank government for remembering me, my children, God will bless Governor Sanwo-Olu’- deceased mother

Lagos State Governor, Mr. Babajide Sanwo-Olu has provided a furnished two-bedroom apartment for members of a family of four who lost their first child, Jumoke Oyeleke, to a stray bullet during the Yoruba Nation rally held at Ojota, Lagos on Saturday, July 3, 2021.

Governor Sanwo-Olu also presented a cheque of N1million in addition to the furnished apartment to the deceased mother, Mrs. Ifeoluwa Oyeleke and his three children to make the family comfortable.

It would be recalled that Jumoke Oyeleke, a 25-year-old Shop Attendant, was allegedly killed on July 3, 2021 at Ojota area of Lagos during a Yoruba Nation Rally.

Four months after the ugly incident that claimed the life of Jumoke Oyeleke, Governor Sanwo-Olu in his kind gesture relocated the family from a shanty at 59A, Bayo Osinowo Street, Ogudu, Ojota area where Mrs. Oyeleke was living with his deceased daughter before the ugly incident to a two-bedroom apartment in Ikorodu area of Lagos.

Governor Sanwo-Olu, who was represented by his Senior Special Assistant on Administration, Mrs. Titi Oshodi, while handing over keys to a two-bedroom flat accommodation at Irawo area in Ikorodu and N1 million cheque to the Oyelekes for them to experience a new lease of life, said the new apartment was to alleviate the family’s immediate need.

She said: “Since the time of the incident, we have been following up with her state and we have been to her initial place of abode. Immediately the incident happened, we started to follow up with her to find out how she was doing, especially economically and Governor Babajide Sanwo-Olu in his compassionate nature has done this to ameliorate the family’s suffering as much as possible.

“It is not possible to bring back the dead, but the government is donating a two-bedroom apartment fully furnished to the family to make life easy, as much as possible, for those left behind. We believe this will help them ease into the next phase of life without stress.

“This was not planned but the government had to make quick arrangements in the interim. So this is a temporary arrangement for her to stay with her children, pursuing other actions going forward. The rent has been paid for three years in advance, and the kitchen is stocked with some foodstuff.

“The government will let us know when a proper and more formidable arrangement has been made for her but for now, what we have is because of the immediate need. The apartment is fitted with basic amenities to make life comfortable for the family. She would also get N1 million to start any business of her choice,” Mrs. Oshodi told journalists.

In her response, Mrs. Oyeleke, a domestic help, who engages in washing people’s clothes and sweeping compounds, thanked the Lagos State Government for the kind gesture, and prayed God to continually bless Governor Sanwo-Olu for remembering her.

The single mother of three children, who spoke in tears appealed to Governor Sanwo-Olu to assist her with permanent employment for her to be able to take adequate care of herself and the children.

She said: “Our former house was a rented apartment but we left because the house was sold to a developer and since I couldn’t afford another house, we moved to a shanty where we have been staying for about a year before Jumoke died. It was a church member who allowed us to stay in the shanty.

“I am a domestic hand. I help people wash clothes and clean their compound. My late daughter (Jumoke), who is my first child, was a sales girl. She was hit by a stray bullet while selling in her boss’ shop during the Yoruba Nation rally at Ojota.

”I thank the government for remembering me and my children. God will bless Governor Sanwo-Olu and what happened to me will not be his portion. God will grant his heart desires.

“This new house is rented and I would not be able to afford the rent when the three years that was paid for expires, so I would love to be employed profitably. I will like to engage in buying and selling foodstuff with the N1 million I was given.”

Also speaking, Jumoke’s younger sister, Ayomide Adeeko, on behalf of the family thanked the Lagos State Government for the kind gesture and pleaded that her mother should be assisted to get a good job so she can train the remaining siblings properly.

“I thank the government for remembering us and doing us good. I pray God will bless governor Sanwo-Olu. I have finished secondary school and looking to attend a higher institution next year. I want the government to help my mother with a good job so she can train me and my two siblings well,” she pleaded.

PIX 1/2: Representative of Lagos State Governor, his Senior Special Assistant on Administration, Mrs. Titi Oshodi presenting a cheque of One million Naira gift and two bedroom apartment to Mrs. Ifeoluwa Oyeleke, mother of Jumoke who was killed during the Yoruba Nation Rally at Ojota, on Saturday, November 20, 2021.

PIX 3: Mother of late Jumoke who was killed during the Yoruba Nation Rally at Ojota, recently, Mrs. Ifeoluwa Oyeleke and members of the family receives One million Naira gift and two bedroom apartment from Governor Babajide Sanwo-Olu on Saturday, November 20, 2021

PIX 4: The new residence of mother, Mrs. Ifeoluwa Oyeleke and members of the family of late Jumoke who was killed during the Yoruba Nation Rally at Ojota, recently, presented to them by Governor Babajide Sanwo-Olu on Saturday, November 20, 2021 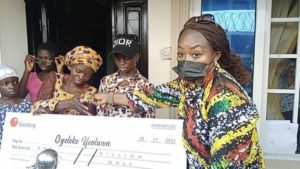 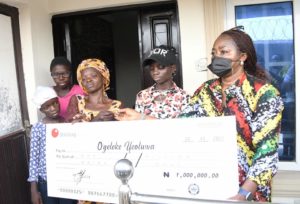 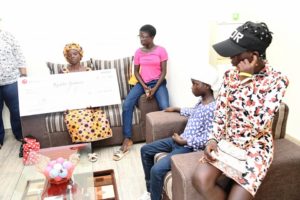 PIX 5: former residence of the Oyelekes, family of late Jumoke who was killed during the Yoruba Nation Rally at Ojota, recently.