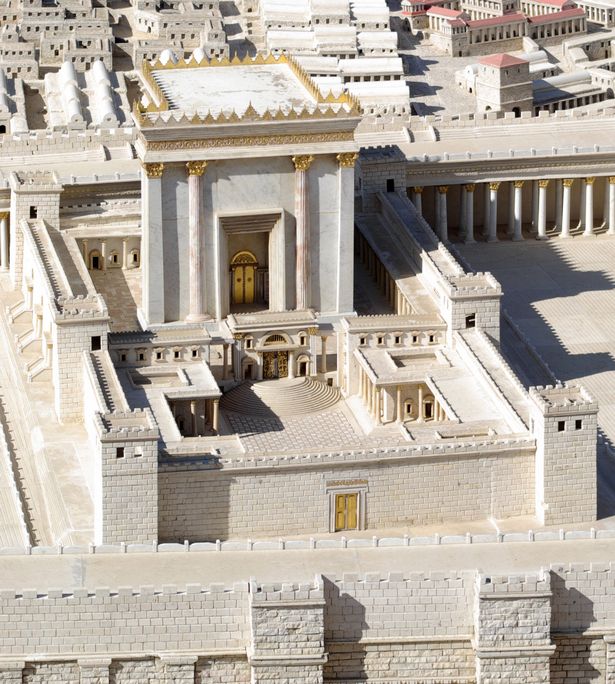 A “magnificent” banquet hall dating back 2,000 years to the time of Jesus has been discovered in a site revered by the world’s major religions.

The hall was found on the edge of Jerusalemâ€™s Temple Mount, called the Haram al-Sharif by Muslims, which is considered holy by Jews, Muslims, and Christians.

Shlomit Weksler-Bdolach, who directed the excavation for the Israel Antiquities Authority, said the â€œopulentâ€ building dated to approximately 20-30 AD.

It comprises two chambers where VIPs would be hosted before visiting Temple Mount itself, archaeologists believe.

Between the chambers was a hallway with a spectacular wall of fountains, where water would cascade from lead pipes incorporated into Corinthian columns.

The site dates from the time of Jesus around 2,000 years ago

Today the hall lies beneath Jerusalemâ€™s Muslim Quarter, and is accessed by the Western Wall Tunnel, an excavation that runs along the western flank of Temple Mount.

Ms Weksler-Bdolach said: â€œThis is without doubt one of the most magnificent public buildings from the Second Temple period that has ever been uncovered outside the Temple Mount walls in Jerusalem.

â€œThe building, which apparently stood along a street leading up to the Temple Mount, was used for public functions.

â€œIt may even have been the city council building, where important dignitaries were received before entering the Temple compound and the Temple Mount.

â€œVisitors to the site can now envisage the opulence of the place: the two side chambers served as ornate reception rooms and between them was a magnificent fountain with water gushing out.

â€œWe believe that the guest rooms, which were also used for dining, contained wooden reclining sofas that have not been preserved.â€

On these sofas, guests would have reclined as they feasted, following the custom of the Romans and the Greeks before them.

One of the two chambers was uncovered in 1867, but the second was only discovered thanks to modern archaeologists.

The hallway between the two chambers was then found too.

The chambers are around 2,000 years old and were discovered in Jerusalem

The building was later divided into three chambers, Dr Weksler-Bdolach added, with a pool or ritual bath being installed in one.

Now the building has been excavated and is open to the public.

â€œHere visitors will view fascinating finds and walk for the first time along the entire route among Second Temple-period remains that illustrate the complexity of Jewish life in Jerusalem.â€

The Temple Mount is a holy site for three major world religions: Christianity, Islam and Judaism.

Jewish tradition holds that it is the place where Abraham attempted to sacrifice his son, Isaac.

It is the former site of the First Temple, also known as Solomonâ€™s Temple, where the Ark of the Covenant was reputedly kept before the Babylonians razed the building.

A modest Second Temple was subsequently built there, which was refurbished into a grander design by Herod The Great, but this too was destroyed â€“ by the Romans.

The Second Temple is the setting for the Cleansing of the Temple, a biblical narrative where Jesus expels merchants and money changers from the holy site.

And in Islam, Temple Mount is said to be the place from which Muhammad ascended into heaven to receive instruction from God.

Today, the site is home to The Dome Of The Rock â€“ an Islamic shrine.

Orthodox Jews believe that they will eventually build a Third Temple at the site, ushering in the next coming of the Messiah.

It is one of the most contested religious sites in the world.