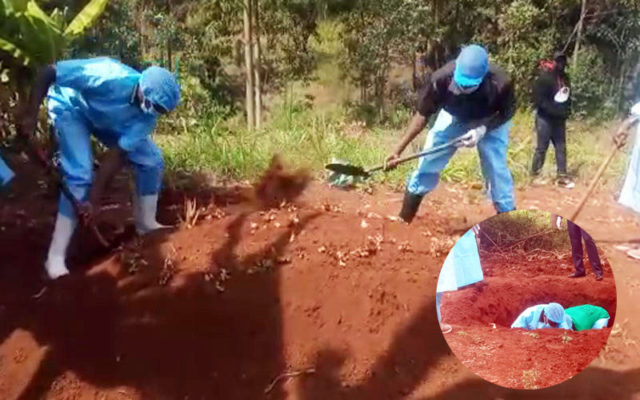 The body of a 71-year-old man was today exhumed after it emerged that he had been buried by a woman who was not his lawful spouse.

Hudson Wanjohi Ndumia died on May 10 and was buried on May 22 by his paramour, who lives in Kagongo, Tetu Constituency in Nyeri County.

It is alleged the woman, who is in her 50s, presented a burial permit while collecting Ndumiaâ€™s remains from the Mathari Consolata Mission Hospital morgue in Nyeri County.

Ndumiaâ€™s family would later learn that he had been buried without their knowledge.

According to informants, Ndumia, a native of Makuyu in Murangâ€™a County, was living with his lover, a widow, at her home in Tetu, Nyeri County.

Ndumia had allegedly fallen out with his wife, prompting the relocation.

The deceasedâ€™s family last week learnt he had been buried by his paramour, forcing them to obtain an exhumation order from the court.

The Nyeri Law Courts granted the applicantsâ€™ their wish on Friday, June 18.

The deceasedâ€™s brother, Samuel Ndumia, told The Standard they were now happy their kinsperson would be buried â€œat his rightful resting placeâ€.

The exhumation conducted on Friday, June 25 was supervised by police.

Ndumiaâ€™s family said they were suspecting he succumbed to injuries sustained during a domestic fight with his lover.

â€œHe had been hospitalised with burn injuries in his private parts. We suspect he suffered the injuries during a fight with the woman he was living with,â€ said Samuel Ndumia.

The family said they were waiting for autopsy to be conducted on Ndumia, when they learnt his remains had been collected for burial.

â€œWe wanted to know what killed my brother,â€ said Samuel.

Ndumia was a retired clinical officer, who worked at the Muranga and Nyeri county hospitals.

The deceased had been buried 50 metres from the grave of his loverâ€™s late husband.

After the exhumation on Friday, Ndumiaâ€™s remains were taken to Mathari Consolata Mission Hospital morgue, where a postmortem will be conducted.

Ndumia is survived by a wife and four children; three sons and a daughter.