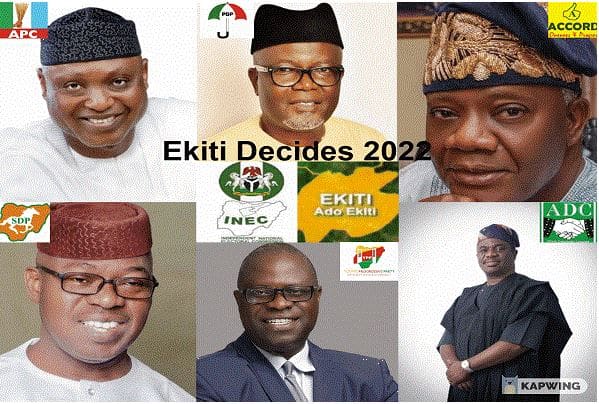 This online news platform understands that the Ekiti election 2022 has the ruling All Progressives Congress (APC), the Peoples Democratic Party (PDP), Nigeria’s main opposition party, and the Social Democratic Party (SDP) as the main contenders in terms of political parties contesting the election.

The ruling APC has Biodun Oyebanji as its candidate, Olabisi Kolawole is the candidate of the PDP, while Segun Oni who was earlier touted to have stepped down for PDP, is bearing the flag of the SDP.

Although the Ekiti election 2022 has been seen by political analysts as a three-horse race, other political parties such as the Young Progressives Party (YPP) with its candidate, Ranti Ajayi; African Democratic Congress (ADC), represented by Oluwole Oluyede; and the Action Democratic Party ADP, with Kemi Elebute Halle, cannot be regarded as pushovers.

Newsone Nigeria reports that all the governorship candidates are in the race to succeed the executive governor of the state, Kayode Fayemi,  and had battled it out in a debate held in Ado-Ekiti last Saturday where they made their plans and policies known to the people of the state.

Voters waiting to cast their ballot in Unit 002, Ward 10, Set Mango area, along Bank (Secretariat) Road in Ado-Ekiti. There are 2,487 registered voters in the Unit 12:34 pm

No complaints so far, says Deputy Governor Egbeyemi after voting 11: 07 am

Related Topics:Election Result
Up Next