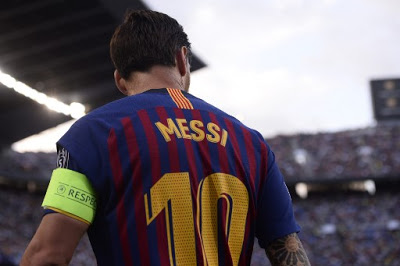 Barcelona football club has announced that Lionel Messi will leave the club this Summer, after the parties failed to come to an agreement, the Editor Nigeria reports.

Messi has been out of contract since the end of June, but the general consensus was that a resolution would be found and his future would still lie at the Nou Camp.

Tonight, in a shocking turn of events, Barcelona have confirmed that Messi will not be playing for the club again.

“Despite FC Barcelona and Lionel Messi having reached an agreement and the clear intention of both parties to sign a new contract today, this cannot happen because of financial and structural obstacles (Spanish Liga regulations).”

“As a result of this situation, Messi shall not be staying on at FC Barcelona. Both parties deeply regret that the wishes of the player and the club will ultimately not be fulfilled.”

“FC Barcelona wholeheartedly expresses its gratitude to the player for his contribution to the aggrandisement of the club and wishes him all the very best for the future in his personal and professional life.”

Also, football transfer journalist Fabrizio Romano confirmed that Messi will not continue with the club next season.

Messi is arguably the greatest player of all-time, a legacy which has been built during a glittering career with Barcelona.

It’s a great shame that his future with the Catalan giants has been determined by financial restraints, rather than it being the right time for him to walk away.

Naturally, speculation will now intensify as to where Messi could be playing his football going forward.

For now, though, let’s let this sink in: Lionel Messi and Barcelona are no more.