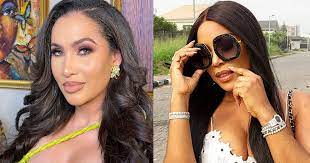 Just to set the record straight because people like to believe these things especially when a celebrity makes the claim.

In it’s 16 years of blogging, Linda Ikeji Blog NEVER EVER wrote that Caroline Danjuma’s daughter is not for her husband. Not only didn’t Linda Ikeji Blog write this, no other blog in Nigeria or beyond wrote this.

If this was a story written by Linda Ikeji Blog, a lot of other blogs would have carried it. There is no such story online on the thousands of blogs that exist in Nigeria. This is a story that was NEVER written about Caroline Danjuma. It doesn’t exist. PERIOD. Feel free to Google.

This story was completely made up by Caroline Danjuma. Or she could have seen it as a comment made by anonymous commenters on LIB or any other blog. But this story was NEVER written about her. Other than calling her daughter ADORABLE, we NEVER wrote anything else about her.

Yes, we did write about Caroline’s age controversy when she came out some years ago to claim she was 27. Many people didn’t believe her and that was the angle of our story. It wasn’t written with malice.

It was only recently, in a post on Instagram in 2022, that Caroline, finally blamed herself for the end of her marrage.

Secondly, Caroline has told everyone that cares to listen that she adores and respects Linda Ikeji and doesn’t understand why Linda doesn’t like her. Linda has absolutely nothing against Caroline Danjuma. She just doesn’t know her.

Finally we ask Caroline to please screengrab the page where Linda Ikeji Blog or any other blog in Nigeria ever wrote that her daughter isn’t for her husband. Its news to everyone today because it was NEVER WRITTEN.”