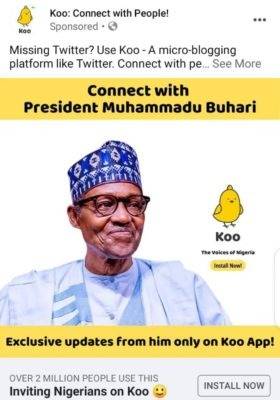 Indian social media platform, Koo, has featured President Muhammadu Buhari on its social media advert page for Nigeria, in what appears to be the President becoming a special brand ambassador to the medium.

Koo placed Buhariâ€™s image on its social media advert with the app promising to provide â€œexclusive updates from him only on Koo App.â€

The app Koo, similar to Twitter, came into the Nigerian market in June. This was soon after the Nigerian government banned Twitter and its operations within the country.

Twitter was banned two days after the platform removed a tweet by President Buhari that threatened to punish regional secessionists in the South-East region of the country.

According to reports in India, Koo was built following the Asian governmentâ€™s constant disagreements with Twitter.

Koo co- Founder, Aprameya Radhakrishna, who earlier confirmed that the platform was available in Nigeria, said they were working on adding Nigeriaâ€™s local languages.

He said: â€œA very warm welcome to the official handle of the Government of Nigeria on @kooindia! Spreading wings beyond India nowâ€.

â€œKoo is now available in Nigeria. We are thinking of enabling the local language there as well. We are considering introducing a local Nigerian language into the Koo app.

â€œNigeria is similar to India in terms of language diversity. It has hundreds of regional languages. Koo has a global outlook and will enable micro-blogging in countries that need it the most.â€

The Nigerian government had stated that all social media platforms operating in Nigeria must be registered as a business entity locally henceforth. The same condition was laid down as one of the preconditions for the lifting of the ban on Twitter.

The Indian microblogging site has since moved in to cash in on the development, preparing to establish a physical presence in Nigeria while connecting with top influencers.

Within days of the Twitter ban, Koo was available on Apple and Googleâ€™s app stores and job openings had been posted on LinkedIn searching for local language speakers.

The latest advertorial of Buhari as the face of Koo in Nigeria was condemned by civil society organisation, Center for Democracy and Development, CDD.

â€œItâ€™s a shame the #TwitterBan has persisted till now, despite the economic disaster it has proven to be for youths who depend on #twitter for their livelihoods.

â€œFor obvious reasons, we find this ad by #koo, another microblogging platform, both immoral and distasteful. KeepitOn,â€ CDD tweeted on Sunday.

Police begins investigation over invasion of Radio station in Ibadan