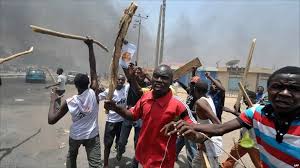 There were protests by youths of Sabon Tashan, Chikun Local Council of Kaduna State, after bandits abducted 15 persons, including a pharmacist landlord and his tenants.

Besides, the bandits, who drilled holes on residential fences and walls of houses, started shooting sporadically around 10.30p.m. before taking their victims away.

Journalists, who visited the scene of the attack, gathered that although 15 people were initially taken, two breast-feeding mothers whose husband were taken away and two elderly and hypertensive women whose husbands and children were also taken away, said they were left to go back when they fainted on the way.

When the Police Public Relations Officer (PPRO), ASP Mohammed Jalige, was contacted, he said he was in a meeting and promised to get back, but has yet to do so at press time.

IN the same vein, the Christian Association of Nigeria (CAN) has called on President Muhammadu Buhari to immediately order security forces to rescue Rev. Popoola Kayode of Calvary Baptist Church, Kurmin Mashi in Kaduna State, who was abducted on Tuesday July 6, 2021.

The pastor was abducted 24 hours after the abduction of 121 students of Bethel Baptist High School, Damishin in Chukun.

Although the abducted students were about 140, some reportedly escaped from their captors.

In a statement yesterday in Abuja, the General Secretary, Joseph Daramola, appealed to the President, the military, the police and the Kaduna State government to ensure the cleric was not murdered like the district chairman of the Church of the Brethren in Nigeria (EYN) and CAN Chairman of Michika Local Council in Adamawa State, Rev. Lawan Andimi.